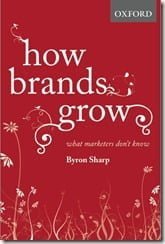 Once in a while, a business book appears which changes your perception on things for ever. Such business books are inspirational (Crossing the chasm in 1992 for instance), some are critical (such as Scott Berkun’s myths of innovation) and some just take you back to basics. This is the case with Byron Sharp’s “how brands grow” (Oxford – 2010), an opus which unfortunately didn’t get enough attention and is even sometimes wrongfully dismissed as scientific claptrap. I must admit that I enjoyed the book thoroughly, even though some of its conclusions did puzzle me a bit. I suppose that these will lead to more investigations, since some of the evidence presented in the book and some of the conclusions based on such evidence (mostly in chapter 7) are very counterintuitive. Here is what I learned and would like to share with you regarding this book.
[This report is being published in instalments, type bit.ly/sharpgrow to display  the piece in its entirety]
Marketers are used to believing their own stories but often fail to check the facts. This is what Byron Sharp and his Ehrenberg Institute have done and their conclusions can be summarised as follows:
myth number one: loyalty matters, acquisition is less important
How often do we hear that it is more worthwhile to retain existing clients rather than acquire new ones? Well… as far as I am concerned, almost on a daily basis. Sharp shows that this is wrong, that churn depends – mostly – on the size of your customer base and that customer acquisition is of paramount importance. This is what is known as the double jeopardy law: “sales are lower because they have fewer buyers who buy the brand less often”. That law, besides, applies to all sectors, and all countries. As a consequence of the double jeopardy law, it is not cheaper to retain an existing customer than acquire new ones. Acquisition, CRM pundits must be eating their hats now, is not an option, it must even be a priority for brands.
… to be continued