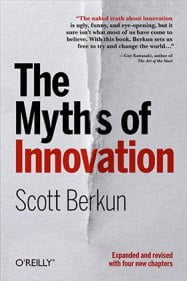 (important notice: this post is the original and unabridged version of a post written in 2010 for Bnet, to which I used to be a regular contributor)
“Poor is the substance, alas! and yet I’ve read all the books”: Stéphane Mallarmé’s warning would be perfectly valid for most of the literature devoted to innovation. There are books on that subject, however, which are worth reading such as the inevitable myths of innovation by Scott Berkun.
Berkun is a full-time writer and speaker and former program manager at Microsoft, the man behind the success of Internet Explorer at a time when the web was dominated by Netscape. He also delivers lectures such as this amazing Carnegie Mellon presentation on the book I am describing here.
His book is not based on dubious principles but spells out clearly the “don’ts” of innovation. It’s a lot more powerful than most books because of that because it’s easier to learn from mistakes than mimic other people’s behaviour. Here are Scott Berkun’s ten myths of innovation summed up in a few words, and I hope this will convince you to buy a copy of his book too:

The 10 myths of innovation by Scott Berkun

Such are the lessons we can derive from Scott Berkun’s research on innovation. In one of his posts on the Harvard Business Review blog, Berkun declared that true innovators don’t use the word innovation at all. They talk about new products, new projects, change management, or just doing things. Innovation isn’t a playground for intellectuals; it’s a game for doers and hard workers. I found the statements so true, and so close to how I felt (sometimes I’m being asked to pitch about innovation and I feel weird about that, because innovation is something one does but it’s yet difficult to describe) that I decided to know more and buy this book; probably one of my favourite business books.
Find out more
read chapter 4 free of charge, courtesy of O’Reilly publishing