The Silicon Valley 2012 blogger bus tour is on its way. This is neither my first blogger tour nor my first visit to Silicon Valley, but this is probably the most interesting tour I have ever put together. This is why I can’t help but share and relay Glenn’s excitement about the tour as posted on the Orange Live Blog which will serve as the platform for our reports in September. More will be said about the tour on this and other blogs, as soon as I’m back from vacations, recharging the batteries and getting ready for that new adventure. 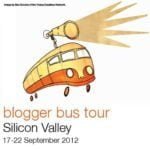 I’m excited! Genuinely excited, in that kid-the-night-before-Christmas way. Why? Because I’m one of the lucky 13 writers from Europe, Australia and China to have been chosen by Orange to go on a blogger bus tour of San Francisco and Silicon Valley in September.

The tour aims to find out what makes Silicon Valley tick. We want to examine the culture of the Bay Area and meet the companies, institutions and individuals that make the area what it is: a world leader in technological innovation.

The area spawned the giants such as HP and Apple – and latterly Facebook and Twitter. We want to know how the area does this. We also want to find out if it will continue to do so, especially as some observers (such as Y combinator’s Paul Graham) think the Facebook IPO might have signalled the end of the Valley’s long reign.