Should brands (and marketers) leave social media? That is the question. Social today is not so much flavour of the month as it used to. It is indeed plagued with a number of issues (fake news and hate speech amongst many other unsavoury things). But this social “quagmire”, to put it in the words of Forrester’s Jessica Liu, is also and above all marketers’ self-inflicted pain.

According to Forrester, Brands are allowed to leave social media, now!

Brands have lost sight of the main objective of social media when they are competing for ever bigger follower counts. To attract the attention of increasingly fickle consumers, they end up spending millions on ads, however feeble the ROI.

An uncompromising report on the relationship of brands to social media 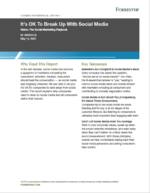 Forrester’s report has very likely prompted a few mixed reactions. It focuses on the real flaws of social media marketing, in line with what Visionary Marketing has been tirelessly repeating for 10 years, including the latest Hootsuite 2018 Worldwide social media usage barometer report.

Let’s study this report which, however controversial, is nonetheless crucial, to the point that I have already incorporated it in my course on word-of-mouth marketing and social media. And let’s answer the question: Marketers, is it time for you to leave social media, now?

Jessica Liu doesn’t beat about the bush. In her report “It’s OK to Break Up With Social Media” (13 May 2020), citing the example of the English company Lush in 2019, she highlights the fact that some companies may leave social media when they feel that what they do on social is at odds with what they were trying to achieve.

For my part, when I first heard about that move, I had surmised that they were trying to attract the attention of the media and that they would reappear on  Twitter sometime later. It is clear that over a year has passed since April 2019 and their Twitter account is still closed. Or rather, it is still open (you never know…), but it has remained silent ever since.

Let’s go back to our main subject and summarise the three points that motivated Jessica’ report.


First of all, marketers’ responsibility for the current state of social media

Many years ago (15 years as of 2020), all companies were asking the question: “Should we be on social media“? In our book “Mastering Digital Marketing Like A Boss” we thought the answer to this was a resounding YES! It made sense for brands to be where their customers were and to engage in discussion with them. However, it is clear that many brands have long lost sight of this objective (check this 2013 Hootsuite video),

They have stopped listening to their audiences and engaging in discussions with them. They may have stopped asking themselves the question as to whether they should leave social media, and yet it has never been so apt. Every year, I challenge my students by picking forty English brands at random (most of them unknown in France), and I ask them to scrutinise their word-of-mouth strategies on social media.

The answer is almost always the same. Apart from a few good practices like Giff Gaff, most of these brands are not there to listen but to shout at people and advertise in a very irritating top-down manner. As social no longer works organically, tons of money is poured out on more or less shady influencers. I have repeatedly urged brands to come to their senses.

I am pleased to see that Jessica Liu has come to the same conclusion. A few years ago, when I was invited to work for a major e-commerce player, I realised quite quickly that they were being ridiculed on social media for the poor quality of their delivery service.

Which they admitted readily and with a sneer. Then they explained to me that they were paying people to advertise to see their posts (often shamelessly posted on Facebook) while at the same time paying other people to delete negative comments that they didn’t want to respond to.

When I explained to them that they might have had to work with the team next door on the quality of the delivery, I was told that this had nothing to do with the price of bacon. On the contrary, I considered that this is the main issue, and I left without looking back over my shoulder.

This top-down way of using social media must be done away with. If, as with most of the brands I ask my students to investigate, your Facebook timelines are full of comments you don’t respond to, my only advice is to delete your page. If, on the contrary, you are using it to discuss with and improve your offer in their interest and yours, then, in that case, I urge you to develop your Facebook page.

Secondly, Jessica advises us to get back to the basics of social media

“Social Media Is Not About You (Companies); It’s About Them (Consumers),” she explains.

In my mind, this is also true of B2B. In B2B, we are often more geared towards expertise and ecosystems. Against all expectations, as I have always said, B2B is the future of social media.

“Don’t let social media hold you hostage,” writes Jessica in the summary of her study.

The report also urges brands to stand firm on their values and to raise their voices when social media platforms behave inappropriately.

Jessica Liu’s report is full of hard truths which some brands might have difficulties to come to terms with. This is understandable. She castigates those brands that have become “party crashers”.

Latecomers on platforms that were originally designed for consumers, individuals and communities, they have put their big advertising trotters in the trough without even thinking about what these audiences wanted to say or do, or how they wanted to interact:

“When organic presences didn’t work, marketers binged on social advertising, increasing global social ad spend from $75 billion in 2018 to a forecasted $165.6 billion in 2023,” adds the Forrester analyst. As Andy Sernovitz once put it, “Advertising is the cost of being boring”. Worse still, they are “Clueless about what consumers want on social networks.”

In conclusion, to the question “should marketers leave social media”? The answer necessarily depends on the context. Few brands have understood how to engage in positive, face-to-face discussions with their customers and prospects to evolve their services and products. 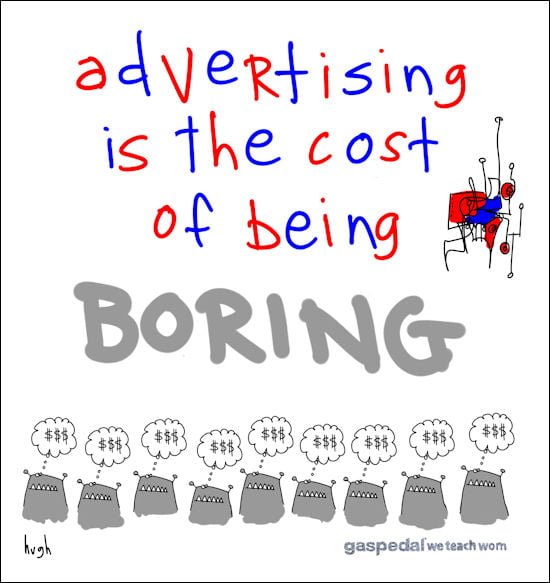 As I explained above, every year I teach about 200 students on these topics, which I believe are both related to the origin of the social Web and its future.

It strikes me, as they are struggling with their assignments, how often they refrain from trying to imagine new solutions (UGC, creativity, inventing new ways of doing business…) even though they are given free rein. It almost inevitably, barring a few exceptions, ends up with advertising and the inevitable prize draw and contests.

I daresay one has to live with social advertising, even though I’m not a great fan. These platforms we use daily have to monetise or else we will soon have to pay for them, which we, as consumers, are not necessarily prepared to do.

However, social advertising should be used at the right time and the right place. That is to say, it should not be used to make up for the lack of feedback, but to support an idea, a concept or a project linked to a real strategic business objective.

Bottom line, should one stay on social media? I suggest you go back to basics, and set aims which are close to your business objectives (improve your product or service, collect insights or ideas for the future, improve your customer experience and user support, etc.) Choose something useful and forget about the lolcats!

Measuring engagement-rates is often an uphill struggle. Besides, the numbers are often disappointingly low. Regardless, engagement doesn’t matter because social media success is not a goal in itself. It’s time brands grow up and understand this once and for all and the question in our headline will never have to be asked anymore.

The Forrester Analytics Consumer Technographics® Benchmark Survey, Part 1, 2020, was conducted from November 2019 to February 2020. This online survey was conducted with 142,480 respondents in the United States and 13,708 respondents in Canada between the ages of 18 and 88, with a 95% confidence rate and results that are statistically accurate to within plus or minus 0.3%. Forrester weighted the data by age, gender, income, region and broadband adoption to demographically represent the U.S. and Canadian adult online populations. The survey sample size, when weighted, was 142,480 in the United States and 13,708 in Canada.