Here are my 5 Social Media Insights for the year ahead. In 2013 I recorded a video on behalf of Hootsuite in which I was introducing the concept of social mass media. Judging by the number of tweets and interactions we had on our post, I sense that we had struck a chord. We are wrapping up the 2016 version of our Hootsuite/Visionary Marketing barometer of social media use by marketers in France. The insights we are deriving from it are showing clear signs of a maturing marketMarket definition in B2B and B2C - The very notion of "market" is at the heart of any marketing approach. A market can be defined..., and indications that there is still a long way to go. In this piece, I will make a few guesses at what this maturing social media landscape could look in 2017 and beyond. 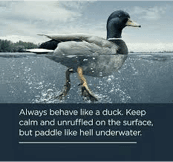 Social media Insights – #1: Some tools are born and others disappear

One thing struck me when looking at the results of our new barometer: the list of social media tools quoted by marketers is evolving. Exeunt Vine (definitely killed by Twitter this year), Viadeo or Xing (cornered to very definite geographies). Enter Periscope, Facebook Messenger, Facebook live and Snapchat. Snapchat is appealing more to B2C companies and is also attracting attention, but many businesses are still struggling with its unusual features and unwieldy interface. It will take time before the dust settles but a new social media giant may be born. My hunch is that businesses will be increasingly experimenting with live video. It has already become a usual tool in live event streaming. We are also experimenting with it as a means to increase engagement in webinars (thanks to this, in one afternoon we managed to get a record 117 job applications for the cloud computing arm of local telco Orange). As 2016 is nearing its end and speculations on the survival of Twitter abound, Periscope may well prove to be a real opportunity for the struggling social network we like so much.

The old mantra of brand engagement in social media has been often repeated but not always understood by brands. Most of them have struggled with this idea that users, be they employees, customers or the average Joe, would talk about their brands on their own social media pages rather than go to the brand’s account page. Social media is still seen as the old way of bringing eyeballs to an owned Web asset, rather than as a major WOMM tool. But things are changing and I see more and more businesses attracted to inbound marketing. B2B companies seem more mature in this area. Few B2B players have the means of investing in advertising. To them, UGC and WOMM is a credible alternative. Besides, inbound marketing is a major source of lead generation, mostly when it is coupled with marketing automation. As Facebook announced it would diminish the amount of advertisements in its timelines, Word of Mouth and UGC are bound to play an increasing role with brands.

Social selling has been buzzword of the year 2016. We have seen it develop in two directions: on the one hand, Instagram has been pushing hard with ecommerce and Facebook is also trying hard to grow its brand new marketplace, which has only recently opened in 4 countries including the US. It’s hard to say how this will fare, with major concerns over the legal aspects of some of the sales of certain items. But Instagram has shown results in that area of social selling. It’s safe to say that social selling for B2C will develop sharply in the next few years, around a mix of consumer recommendations, customer engagement and direct sales. As far as B2B is concerned, LinkedIn is punching in the major league and there are no other contenders. Sales navigator is on everyone’s lips and the name of the game is how to use social media for sales. My prediction for 2016 is that businesses will have to learn a few things about social selling. Firstly, social media is not a short-cut for hard-sellers. Secondly, there is a tendency to urge salespeople to push content towards leads and call it inbound marketing. This will need to be fixed: Marketing and Sales will have to work better together. Things are brightening up in that area, but too many businesses are still struggling with the implementation of such strategies.

Content, at the heart of any compelling social media strategy, has been on everyone’s agenda since 2014, when Joe Pulizzi wrote Epic Content Marketing. All businesses started to produce content en masse after reading this book, even though content marketing is far from new (I have practised it since 1996). The issue however is that content is already plentiful and needs to be more compelling, specific and differentiating. I confirmed my assumptions about this with a mixed audience of IT and Marketing experts at a keynote presentation I delivered for eZ Systems a few weeks ago.
Businesses now need to produce less content and make it more engaging, as Joe Pulizzi himself admitted. As social media and content marketing are slowly maturing, we will see an increasing number of businesses reviewing their strategies to maximise engagement on social media. It’s no longer a matter of content nor influence, but of confluence.

As far as social media is concerned, the divide between B2B and B2C is growing. This has always been the case but at the beginning of the social media era, there used to be a tendency to try all tools, regardless of the sector you were in. This is no longer the case and certain tools (Instagram, Facebook, Pinterest, Snapchat, etc.) are definitely ignored by most business to business companies whereas others (LinkedIn and even Twitter to an extent) are underused by B2C. Even though social media is common to all, approaches and techniques tend to be increasingly different. Yet, B2C can use social media – and Word of Mouth marketing –  beyond entertainment and pure short term engagement. There are possibilities for such businesses to increase the understanding of the needs and pain points of its customers (one of the major takeaways from last year’s Hootsuite barometer) and do more in-depth content which brings leads and fuels marketing automation (a B2B marketing staple). Conversely, B2B companies should try and position themselves through social media and cross-fertilise their approaches with B2C best practices. My prediction for the years to come is that more B2B businesses will use B2C social media and video-based approaches (such as the ones used by Blendtec, Volvo Trucks and Caterpillar) and vice versa. This will require more maturity and the ability to understand other sectors and how to adapt techniques to one’s environment.