What if B2B were the future of social media? Time and time again, I have heard people say that B2C is better suited to social media than B2B. As a matter of fact, I am not at all sure about that. The fact that fewer B2B brands are jumping on the bandwagon is probably more due to the maturity of that sector than the fact that the medium is not adapted to B2B.

B2B is the future of social media

Indeed, if one wants social media to have an impact, one needs to foster collaboration and create communities, which is generally done through 3 main vehicles: passion, mutual help and common benefit.

These 3 common ingredients of collaboration and social media are in fact very commonplace in the B2B arena; communities are often smaller, very vertical, more focused on their abilities to deliver and always ready to debate technical points, opinions etc.

Besides, business to business is far less exposed than consumer marketing, as in the recent Nestlé example, in which the Swiss firm has not quite been able to appraise the situation and deliver appropriate responses. Online fighting with Greenpeace and other activists on social networks is a lost battle from day one for B2C brands.

The leeway that brands have in such cases to defend themselves is not very significant – and the case made by Greenpeace is a bit overwhelming too (see maps on the right-hand side, courtesy of mongabay.com).

Indeed, Nestlé uses Palm oil, which is both an issue from an ecological and dietary point of view, granted; but all mass producers of foodstuffs use palm oil because it’s cheaper and plentiful.

When activists target a company like this one, the result can be terrible, even though I am not at all certain that Facebook will have the best of Nestlé, the effect on brand equity is still very bad at the very least.

At the end of the day, the Swiss manufacturer has yielded to pressure. Still, instead of turning this into a customer benefit, it’s more a matter of acknowledging their “mistake” and trying to catch up with the criticisms.

As far as B2B is concerned, there is less resentment, clients are more prone to negotiate than to complain online, and they also know that when complaints are voiced too crudely online, it’s not always good for your own – and your company’s – reputation either.

Besides, in B2B, it is also easier for clients to make their points directly to sales and/or marketing. I have heard example in the United States of software vendors (I cannot quote brands) having problems with former employees who avenged themselves by becoming trolls (that is to say online detractors on forums and social media). Still, in general, the B2B environment is more straight-laced and more likely to trigger responsible discussions.

One may argue that you might get fewer comments on B2B social media and blogs in particular (at Orange Business Services we got 1,500 in 2009 only, so it’s not that bad in fact). Still, when we get some, they are a lot better and more interesting than most of the comments that you get in B2C.

Most of the time, they are passionate discussions about in-depth subjects, including complex points of views and explanations. How complex can you get on a consumer product? Usually, it doesn’t get very far, or it runs round in circles. In B2B, co-creation and co-innovation are already old-hat, so why not use the Internet to pursue the discussion online?

Such discussions and comments enable one to improve one’s products (it happened to us 4 times in 2009), and it can even help us improve our knowledge when an Internet reader comments on one of our articles, corrects our mistakes and helps us improve our vision.

A little counter-intuitively, I would even venture to say that B2B is the future of social media because it is B2B brands which can actually most benefit from the use of these tools.

We established the proof of this with our @orangebusiness Twitter account by placing our brand in the top 10 French brands on Twitter, right behind worldwide renowned brands like Louis Vuitton or Yves Saint Laurent (source:  [Fr]01 Informatique, May 2010) and even above Air France.

Yet, being popular on the web with a brand like Air France is a lot easier when you think about it. Yet, such is the passion triggered by what we did collectively that we are on the verge of building what is the nirvana of social marketing: a community (Air France already has one, it was created by one of their fans but it’s hard to admit that you have to relinquish the responsibility for your brand even though this is the right thing to do when a community already exists). 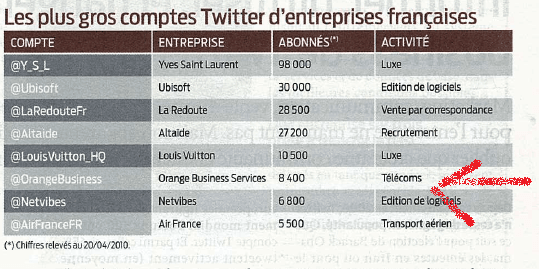 http://twitter.com/orangebusiness is the 6th French brand on Twitter (source: 01 Informatique May 2010, April numbers).

Lastly, it is difficult for a B2B firm to do traditional advertising and namely TV commercials. Often, budgets are tight, and TV commercials require vast amounts of money while delivering sometimes variable results. Into the bargain, most B2B players are reluctant to spread the word about niche products or services on popular TV networks.

Social media, on the contrary, proves efficient and economical when it comes to marketMarket definition in B2B and B2C - The very notion of "market" is at the heart of any marketing approach. A market can be defined... B2B products/services: in other words, Nestlé needs Facebook less than B2B needs Twitter (mark my word, I didn’t write does not need Facebook).

B2b is really well suited to social media even though its topics will not make the headlines. They are more technical and — if taken at face value — less pertinent for consumers. But at the end of the day, this is also what keeps trolls at bay!

And this is also why a lot of B2B social media marketing budgets are dormant due to the lack of new ideas, whereas so much can be done.