WeChat, also called “Wei Xin” in Chinese, is the most popular social network application in China, and its monthly active users hit 650 million in 3Q-2015. Today, it has even become a kind of “lifestyle” for the Chinese. Its holding company, Tencent, has also showed its global ambitions by internationalizing Wei Xin. Only nine months after the launch of Wei Xin in January 2011, its English version was created. In April 2012, WeChat replaced Wei Xin as its English name. ​

WeChat supports account registration via SMS in at least 100 countries and regions, and there are 19 WeChat versions in different languages for users to locally choose Chinese, English, French, German, Spanish, Italian, Korean, Japanese, Thai, Arabic, etc.  The application can be downloaded from almost all mobile operating systems like Android, IOS, Symbian and Blackberry. What’s more, it’s possible to invite one’s contacts on Facebook and Twitter directly to join WeChat via an interface.

With few overseas offices, WeChat is rolling-out on a country-by-country basis through local partnerships, investments or acquisitions, and seeking to reinforce its global reputation.

For instance, in 2012, Tencent acquired 13.5% of  Kakao Talk, a South Korean mobile app developer, for $64 million. In 2015, the group invested $50 million in a Canadian startup, Interative Kik, which had more than 240 million registered users and a strong base among U.S. teens. Kik’s founder, Ted Livingston, regularly explains the company’s ambition to become “the WeChat of the West.” However, it looks that Tencent’s overseas investments have been more focused on game-related companies so far: Pocket Gems (US), Glu Mobile (US), Kamcord (US), Miniclip (Swiss), CJ Games (S. Korea), Reloaded Studios (S. Korea), etc. Very recently, Tecent has teamed up with Naspers, Africa’s largest media group, to introduce WeChat across the continent.

In 2013, the company launched a communication campaign in which the football player Lionel Messi was shown using WeChat and even calling his mother.

However, WeChat’s users are still mostly Chinese and its overseas presence is mainly focused on Southeast & Southern Asia and Latin America. Even though more and more Westerners use WeChat, it’s mainly for keeping in touch with their
Chinese friends, or families and friends living in China. 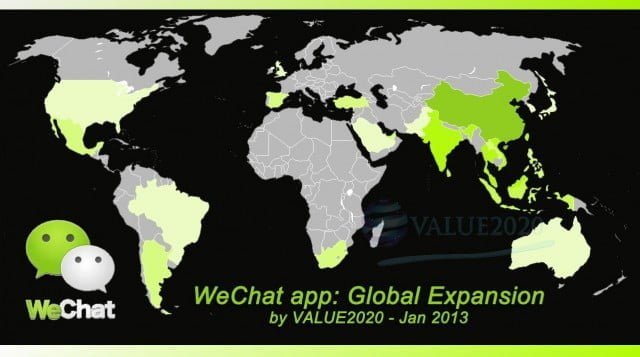 So, can we expect WeChat to succeed in the international market?

What’s quite positive is that MA Huateng, founder and president of Tencent, seems highly motivated. He once said, “WeChat is Tencent’s unique chance to expand worldwide.” Then, the exchanges between China and the rest of the world have continued to increase, which creates a word-of-mouth effect among those who are interested in China. Furthermore, Tencent is able to support its internationalization strategy with significant financial resources. In 3Q-2015, its turnover and profit reached $4.18 billion and $1.19 billion respectively, both with a YOY increase of 34%.

One of WeChat’s key differentiators lies in its multi-features driven by customer experience and even broader than those of Facebook, WhatsApp or Skype (covering text or voice messaging, call/video call, personal updates, news reading, content sharing, group discussions, “Mobile Wallet”, brand promotion via public accounts, on-line games,…). However, WeChat’s functions which will really attract users abroad will vary to the local market, thus making the application lose more or less its differentiating factor compared to its rivals. People born and living abroad will probably – at least in the beginning – focus on WeChat’s functions around text or voice messaging, call/video call or gaming. This can be explained by three main reasons:

WeChat faces stiff competition from social networks which are already dominant abroad – in particular Facebook, WhatsApp and Skype in European and American markets, and Line and Kakao Talk in Asian markets. By releasing Facebook Messenger (2011), by acquiring Instagram (2012) and WhatsApp (2014) which has gained much popularity especially in Europe, Latin America, Asia and South Africa, Facebook has further reinforced its global reach and mobile-oriented services. Since April 2015, Facebook Messenger has also launched free VOIP video calls over cellular and wifi.

Let’s also take a look at the number of likes on the official Facebook pages: WhatsApp has gotten 23 million likes, Skype almost 30 million likes, while WeChat has only received around 3.5 million likes.

Like many other Chinese companies, Tencent hasn’t yet acquired much international experience, neither in adapting to local customer needs, culture or legal environment, nor on brand building, communication or promotion. It should be noted that the political risks related to one country’s information security protection policy still exist. Here’s an example: Huawei, the largest telecommunications equipment manufacturer worldwide, hasn’t yet acquired significant market shares in the American market, due to this constraint.

“Localizing” the product and services is Key

In conclusion, to succeed in its global expansion strategy, Tencent probably needs to “localize” WeChat in the West, which means: firstly, further adapt WeChat’s functions to the local markets and needs; Secondly, further reinforce its brand communication and reputation by engaging local opinion leaders, resources and talents; Thirdly, continue to leverage the word-of-mouth effect on potential overseas users; And finally, build more quality partnerships with other leading social networks, and/or local business partners.

This will surely require time, energy, strong engagement, patience and in particular, a long-term global expansion strategy. The majority of Chinese companies are still at the beginning of their internationalization path, but we can expect that, in time they will mature and bring more added value to the global market and customers!