On day 3 of the blogger bus tour we had the opportunity to meet face to face with two young start-up managers from San Francisco based Social Chorus an “influence marketing” company named Social Chorus. We were able to spend a whole hour with them and discuss influence, influencers, people-powered marketing and … “the power of the middle”, a concept which I have found particularly appealing.

Real influencers in social media may not be those who you think!

Nicole Alvino (above) is SVP and co-founder of Social Chorus, she was “employee number two” in the company. Bobby Isaacson (below), senior Manager, implementation has been as Social Chorus for about three years now (he admitted “feeling like a dinosaur” which sounds strange for such a young man) and does business development that is to say that he sets up partnerships with other companies, in order to be part of their ecosystem. 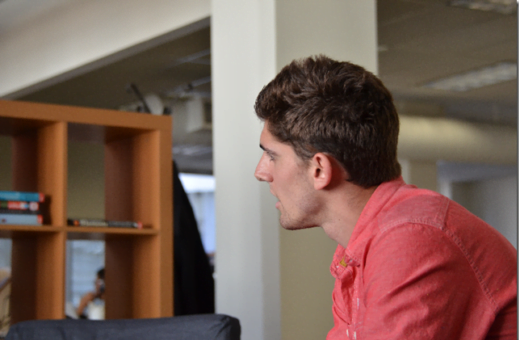 Social Chorus (the company was in fact renamed in February 2012 and is the result of the merger of youcast  and the halogen media group) is a social marketing/influencer platform. The main problem the company is solving is that it is virtually impossible for customers to figure out whether influencers are really influential.  This is in essence, what Social Chorus is about: it provides both a tool and service for finding influencers (they might not just be bloggers, but also power twitter users  for instance. There are two offices, one in New York City and one in San Francisco.

NYC and SF: a world of difference…

To European eyes, those two cities might appear very similar but in fact, according to Bobby and Nicole, they are very different. New York is more about media and advertising and agencies, whereas Silicon Valley and San Francisco have always been, at least since the seventies onwards, more about high tech. But this is not all.

Mentalities are also very different. Bonding is more difficult in NYC, a very large metropolis where, according to our discussion, people and companies tend to keep things for themselves, rather than share and get together in Californian fashion. And this is what makes all the difference.

As I described in my post about Rocketplace, a lot of what happens in Silicon Valley is down to the ecosystem. San Francisco has a leg up in that game. Only Boulder, Colorado and Austin, Texas are adopting the West Coast spirit our hosts both declared.

Social media at the forefront of investment

Start-up investment has changed too according to Nicole. “2 years ago, investment was more into media and advertising, now it’s a lot more about social media” she said. This is changing the ball game, Nicole said, “now that agencies are becoming more social they are tending to move over to SF”.

Topical and brand influencers … not who you think

Social Choris is aiming at “brands wanting to become more human and having relationships with influencers” Bobby added. But how do you identify them and how can you tell they are really influential? “it’s a combination of art and science” Bobby went on. “There are topical and brand influencers” he said. Social Chorus will traditionally tap into its 1.5 million influencers database but they might also use Kred and Klout. Sometimes the best influencers are niche bloggers through.

“Imagine a pyramid” Bobby went on: “PR handles the celebs, super fans and topical bloggers are in the middle and at the bottom, you have the vast majority of fans and readers who click and comment”. They might not be bloggers, they could just be twitterers for instance. Social Chorus’s focus of the solution is measuring the impact of a conversation with influencers. Manage the relationship over time.

The “power of the middle”

“This can become pretty expensive soon,” Nicole said. I would also add that celebrities are often too self-centred in order to be generous. All middle-tier influencers on the contrary are more open and more prone to become brand advocates because they will want to develop a relationship in the long term with the brand.

Social Chorus is working with agencies like Edelman, Ketchum and others. It’s mostly agencies who are delivering this service to clients, but there are a few clients like Gatorade for instance who do this for themselves. “What we find is that the interest in that space exceeds the knowledge of how it works” Bobby declared. As a result, only 10-20% of the brand on average are willing to do this by themselves.

One of Social Chorus’s biggest challenges though is to hire developers; there is a lot of competitionMarket definition in B2B and B2C - The very notion of "market" is at the heart of any marketing approach. A market can be defined... for developers. A very skilled developer in the valley can be paid $100 k and even up to $ 200 k if he has very special skills it’s commonly said here. As a matter of fact, as an entrepreneur told me at an after-work party last night: “the developer in question might even be paid more than the project manager he reports to!”.

Social Chorus can operate over 3 different countries: the UK, US and Germany. They will soon launch a new version in 2013, which will extend the service to other countries.