Wheat prices are spiking. Because of the present structure of commodity markets, hedging intermediaries benefit the most. To find out why, Yann Gourvennec, CEO of Visionary Marketing, asks Noah Healy, founder of Coordisc, to shed light on this topic.

Disrupting Commodity Markets  for the Sake of Fairness

The price of wheat had a steep spike and is continually fluctuating. Inflation and supply restrictions are to blame.

However, the farmers do not gain from this spike. Hedging middlemen are the ones lining their pockets because of the current commodity marketMarket definition in B2B and B2C - The very notion of "market" is at the heart of any marketing approach. A market can be defined... structure.

Noah Healy, the founder of Coordisc, seeks to disrupt this commodity market and provide a fairer solution.

What are Commodity Markets?

Commodity markets link producers to consumers. A commodity market is typically a virtual marketplace where one can sell, trade, or buy different commodities immediately or at a future date.

The primary customer base is hedge funds and other internal traders. This is a financial system similar to a brokerage or a bank.

You go in and make bets on where you think prices are going to be in the future. If somebody exists that is willing to take the other side of your wager, then the system writes that up and publishes the fact that somebody made this bet

Next, within a millionth of a second later, this happens all over again with all the people that showed up in that microsecond to make those deals.

Each deal has an expiration date on it. On that date, all the bets that have not yet been sold off and liquidated settle. About 97% will settle out and 3% deliver.

This is referred to as “futures.” An agreement to buy or sell a specific commodity at a future date and price.

The farmers engage in the commodity market to work out the value they will be able to get for their crops.

Most farmers operate on credit and borrow money every season. They must be assured of their revenue streams so that after a regular season, the loan can be paid off.

With good credit history, farmers can continue receiving loans. Thus, farmers are forced to accept the prices the market offers, locking themselves into these future situations.

With the Ukrainian crisis, fields have been destroyed and Russia may stay under sanctions. There seems to be a “durable supply contraction.”

Other parts of the world should increase production to offset the loss of wheat in Ukraine.  However, because farmers’ incomes have been contractually agreed upon, they are not sensitive to price increases.

The price increases do not affect farmworkers because they have already agreed to a specific price. The people that offered the farmers those hedges receive the windfall.

However, Russia recently struck a deal with Ukraine to allow grain exportation. Due to the war, the supply had been previously staying in Black Sea ports.

Russia will allow Ukraine to export 22 million tons of grain and other agriculture. It is unpredictable as to how the deal will affect wheat prices or if Russia might retract this agreement in the future.

[Note: the long term trend can be seen above, one should look at these figures rather than short term fluctuations]

The people providing the hedges benefit the most, Noah says.

This is much like a gamble and everyone cannot always win. The hedge-providing people are wealthy enough to take those risks. Some bets pay off and others do not. However, the bets will most likely pay off.

They also do not absorb as many costs as the farm owners. These people are also necessary to the operation of the market.

The current market design would cease existing if institutional or systemic change happens to them. If they began losing money, government intervention will cover their losses and keep them afloat.

Noah Healy wants to redesign the market by allowing the producer and consumer sides to directly negotiate with one another. He will then rely on computer communication to create universal messaging and batch processing. He will,

create large groups of buyersThe B2B purchasing process is the result of a long life cycle often linked to a contract as there are many people to convince. and sellers that can be matched off against each other at a common price. That price can be made less expensive than this emergent common price that the existing model gives

These middlemen will not want the new system to bypass them. Yet, the change will have to happen voluntarily.

Noah compares the market metaphorically to a pie. Each middleman has an individual slice of the market and there are more of them taking the same size slices to increase their section of the pie.

These middlemen are not a “collusive block” but are competing with each other. The new design offers middlemen for someone to step out, break the mould, and set up as an operator.

The sooner someone does, they can carve a larger share for themselves. The size will be bigger than could have been possible with the original market but also decreases the total share within the new market.

His second phase is to change the structure of how the market measures and rewards success.

I can create a market where the returns are a large multiple, say ten times what the expected returns used to be by making it a lot cheaper to invest in the marketplace.

The first person who diverts from the old market can get a much higher income than previously.  Those that follow, can participate and replicate their old income. However, they get to invest less or receive a smaller share while achieving a much higher rate of return.

Noah is working to establish this new system beginning in the United States, South Africa, or Singapore. There is hope for the future but he does not know when we will see a significant change. 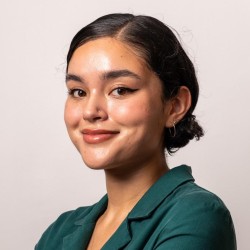 Mandy Phillips
Junior Web Content Marketer at Visionary Marketing
I am a senior majoring in Visual Art Studies with a minor in Business Administration and a minor in Art Management. I attend the University of Texas at Austin. I am currently an intern for Visionary Marketing in Paris, France.