today’s selection is a (very old post) dated 2006, taken from this very blog … 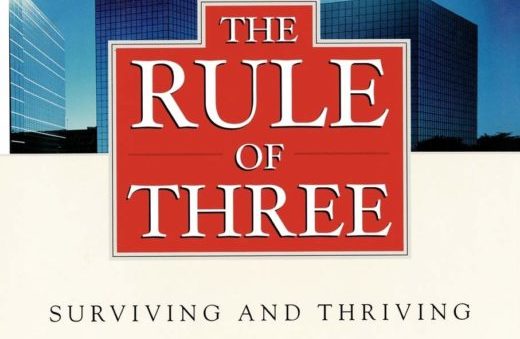 … in which I was commenting on a book entitled “the rule of three”. I realise that this analysis is still – or maybe more than ever pertinent – and therefore I decided to revive this post, update it significantly, and submit to my readers again today.

Have you ever wondered why most markets – when they are mature enough – end up being dominated by 3 players? Sheth and Sisodia (2002 – buy it from Amazon; note that there are second-hand books available from as little as £0.49!) have carried out a study about this and their book is available in electronic format too (buy a kindle version here for £9.99).

12manage.com comments that this is not applicable to Europe. On the contrary, it does apply to Europe too, or any other area for that matter, provided local markets are open to fair and unbiased competitionMarket definition in B2B and B2C - The very notion of "market" is at the heart of any marketing approach. A market can be defined... and transparent (I know, this is a paradox, fair competition leads to less competition in the event).

For instance, if you apply this rule to the telecoms market, it is very likely that you will find that the rule applies in each country/zone of influence individually (multi-national markets). It’s not that the rule is false. It’s just that those markets are heavily regulated and therefore, keep introducing new devices to revive competition at regular intervals.

In the US, the situation is different though; a few decades ago, AT&T was broken into small companies by the regulator, but the rule of 3 applied in the end nonetheless (Stephen Colbert described this phenomenon in a classic pitch, click the Colbert picture below to view an extract).

The process of introducing more competition ended after that though, it is not the case in some European markets in which new devices are still being introduced to fuel competition and lower prices (transparency: I work for a Telco, my comment is and will remain neutral for obvious reasons)

Where globalisation has already happened (for instance in the fast-food market), the rule will apply across Europe with Mc Donald’s, Quick or Burger King and the rest of the niche players for instance. Does that mean that the ultimate goal of open competition is … less competition? Eerie isn’t it?

A final comment is that not all markets, even in the high-tech sector, are truly global. Whereas the IT market is for instance (same brands, strong consolidation, same products sold from one end of the planet to the other etc.) others aren’t. Besides, a multi-national market (i.e. an addition of heavily idiosyncratic markets in many countries) isn’t really the same as a global market. In multi-national markets, many discrepancies persist, even when the brand itself is global.

Seth Godin described this phenomenon in a different way, in his famous opus entitled “unleashing the idea virus”. Here is the passage about what he calls “Zipf’s law” (the book is rather old too, but it doesn’t matter anyway, what Seth described then is still valid now).

“There’s a name for this effect. It’s called Zipf’s law, after George Kingsley Zipf (1902-1950), a philologist and professor at Harvard University. He discovered that the most popular word in the English language (“the”) is used ten times more than the tenth most popular word, 100 times more than the 100th most popular word and 1,000 times more than the 1,000th most popular word.
It’s also been discovered that this same effect applies to market shareMarket share  can be defined as a percentage accounted for by a given producer or brand in its own market. Market share = Current market of producer or brand / Current market of product all brands for software, soft drinks, automobiles, candy bars, and the frequency of hits on pages found on a website. The chart above shows actual visits to the different pages at Sun’s website [editor’s note: in 1996].In almost every field of endeavour, it’s clear that being #1 is a lot better than being #3 or #10. There isn’t an even distribution of rewards, especially in our networked world. On the Net, the stakes are even larger. The market capitalization of Priceline, eBay and Amazon approach 95% of the total market capitalization of every other consumer eCommerce stock combined [editor’s note: still in 1996]. Clearly, there’s a lot to be gained by winning.”