Gaming has always been an enormous industry, and with modern mobile gaming, there is no exception to that. Gaming has been a way of life for many, for decades. With the rise of mobile technology, it has only served to make gaming more accessible and possible anytime, anywhere. That’s why it should come as no surprise that the best mobile games on the marketMarket definition in B2B and B2C - The very notion of "market" is at the heart of any marketing approach. A market can be defined... rake in big dollars. Using the super-resourceful fact sheet from “PlayMobi” at the end of this article, we are going to take a closer look at the top five mobile game apps and how much money they make on a minute-to-minute basis per year. 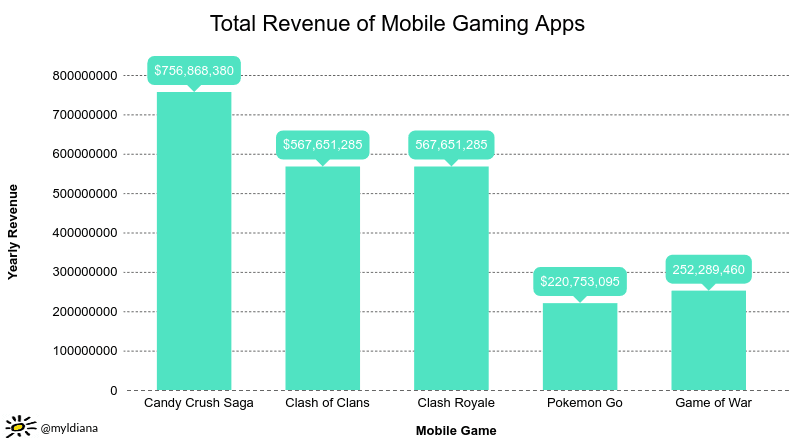 Another one by Supercell, Clash Royal is classified as a freemium mobile tower rush video game, released on the global market in March 2016. This game is made up of a combination of elements: collectible cards, tower defense, and online multiplayer battles, to name a few. Every minute, the game is installed 21 times, just like CoC, but only generates about $847 in revenue in that same time span. In an hour, the game makes $50,407. In a day, it makes $1,209,607, totaling to about $441,506,555 in a single year in revenue.

Born from a collaboration between Niantic, Nintendo, and The Pokémon Company, Pokémon Go was released to a select few countries in July 2016. The free-to-play, location-based augmented reality game quickly garnered over 500 million downloads worldwide, and averages about 22 installs every sixty seconds. Every minute, Pokemon Go generates $423.50 in revenue, working out to $25,203.50 every hour. Each day, the game is installed 31,104 times and generates $604,803.50, working out to a total of $220,753,095 worth of revenue per year.

Released by Machine Zone in 2013, Game of War has consistently made it to the top of many “best multiplayer online strategy video games” lists, and was one of the top-grossing apps in 2014 and 2015. Although the hype has slowed down a bit from its former launch and glory days, the game is still in the top 5 for mobile activity. Every minute, GoW is installed about eight times and grosses $484 in revenue. In an hour, it makes $28,804, and in a day, it makes $691,204 in revenue. In a year, Game of War makes around $252,289,460 – just over a billion dollars.

How Ads can Add Value to Gaming Apps (Comment From the Editor: Diana Mylonas)

You may ask where all these revenues come from, as many of these apps are free. It is predicted that by 2020, 63.7% of the population will be using their mobile devices to play games. This large percentage has, of course, motivated marketers to use gaming apps as a platform for advertisements.
Worldwide advertising revenue from videogames alone is $5.61 billion, and it is predicted to continue to grow by $1.3 billion by 2019. Advertisements can be a positive addition to a mobile game experience, as long as they are relevant and dispersed. Gamers tend to get addicted to games, and advertisements are not going to get in the way of their gaming experience.
According to a study commissioned by Facebook Audience Network, 73% of gamers are happy with the ad-funded model of gaming apps. Users claim to understand the need for ads because they realize they are getting the game for free. The majority of gamers are happier with advertisements that give users the choice to engage, such as rewarded video ads. Rewarded video advertisements go back to the idea of permission advertising because users receive free benefits that are used to improve their gaming experience. You can watch the video below if you want to learn more about the importance of rewarded video ads in gaming apps.