It is customary to say that we are living very innovative times, that the changes we are going through are huge, and that our economy is fast-paced and innovative. When asked for evidence, technology pundits will always come up with the same answer: Internet and Smartphones are ubiquitous. While there is no denying the fact that both the Internet and Smartphones have had a tremendous impact on our lives and the way we do business, our times may well be far less innovative than originally thought. In his piece “Beyond The Internet, Innovation Struggles to Lift Productivity” (published by WSJ on August 12, 2015), Greg IP offers explanations, beyond mere appearances. As I read his piece this Summer, it also triggered thoughts that, if anything, one will have to accelerate the integration of digital in the “real world” in the next few years, not slow it down. This may come as a shock to many people.
The crux of the problem is here: does technological innovation have an impact on overall productivity? Apparently it doesn’t (“productivity grew just 0.4% per year over the past five years, one of the slowest stretches in the period since World War II” says IP). Many things, beyond the Smartphone, have not changed that much. In the past 30 or 40 years. Indeed, according to Greg IP, there are three possible reasons for this:
1. pessimistic assumption: innovation is happening and is grossly exaggerated. It has no, or not much impact,
2. optimistic assumption: it does have an impact but it can be measured,
3. neutral (neither optimistic nor pessimistic) assumption: it is happening but has no impact on the “real” world. It only 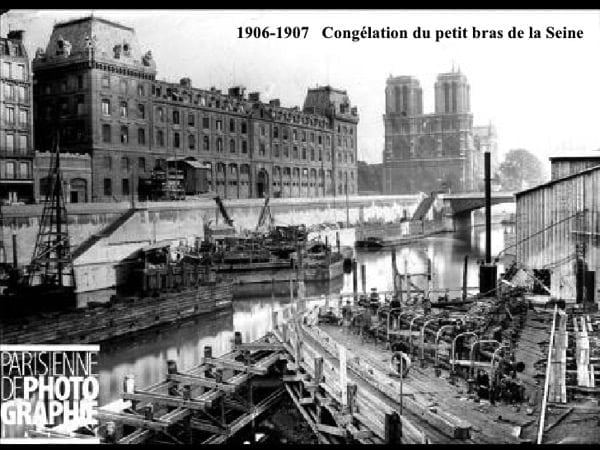 Legend: It took four years for Paris Metro engineer Fulgence Bienvenüe to finalise his plans for the crossing of the Seine. In 1910, he directed the works which led to the freezing of the soil for a length of approx. 70 yards with 57 17m deep shafts filled with brine of calcium chloride at -27°C. Imagine doing that in 2015? In 2015, the extension of line 4 for 1 extra station beyond the peripherique was finally completed after 4 years of disruption.

Explanations for the low impact of digital on productivity gains?

IP opts for solution number three and has an explanation for this (based on the work of Michael Mandel for the progressive Institute):
1. advances in applied sciences (like thermoplastics and maybe new alloys and metals) have stalled. All the new products which the 1950-1960 golden era of chemistry has produced are now ubiquitous. Innovation is only marginal. biosciences aren’t working – this is IP speaking – or rather are unable to produce such breakthroughs as the invention of antibiotics. A rather negative statement, yet many of my discussions with my scientific-trained wife end up in the same alley: there are few advances in those departments nowadays, or at least they tend to be less spectacular,
2. productivity gains are far less impressive – still Greg IP speaking – than ever before. Planes carry more people but there aren’t very different from what they used to be in the late 1950s. With With the loss of the Concorde, one may even find that speed has decreased. One of the reasons for this may be that our Society is less focused on innovation, and technological prowess, and more prone to raise issues about safety. Both subjects aren’t that compatible,
As our workforces (in Western countries at least) are moving rapidly away from manufacturing and focusing massively on service and knowledge work (I’ll get back to that when I analyse the latest McKinsey report), I would however disagree with IP’s point about productivity gains. Even though it’s hard to measure. I know for sure how I can assess the impact of new technologies on the kind of work that I, and our consultants at Visionary Marketing, are doing. Most of us are able to manage or even deliver, single-handedly, up to 10 different engagements at the same time. That would not have been possible even 10 years ago. Maybe the maximum of projects I could have managed up until the end of the 1990s was 2 or 3 (I mean large ones). The increase in productivity in that department, really is spectacular. Yet, it is hard to measure with hard facts and figures. It took years before can manufacturing was taken into account in the calculation of GNP according to French economist Daniel Cohen, it may well then take another 10-20 years before IT and digital are actually accounted for in productivity gains when economists decide to measure them.
All I know however is that the current impact of digital on most industries is still weak and changes are taking place very slowly. It may not look like that to many professionals who are already struggling with the idea of making digital technology and ally in their daily tasks, but if anything, the pace of change is bound to accelerate; not slow down. That’s how I see and interpret Mandel’s study: productivity gains due to digital may be low at the moment, but chances are that, for that very reason, the implementation of digital change in organisations will tend to intensify in the future. Be ready for it.