The media is being revolutionised by digital media

Is the media world being reinvented by digital media? That sort of question has definitely escaped the realm of geeks in order to be debated by media experts themselves. So when I was invited by HAVAS‘ Dominique Delport to attend a conference with Jonathan Taplin, I couldn’t resist the urge of listening to his points of view on how the media industry has evolved, where it’s headed to and how and why the world is really changing. Taplin is director of Annenberg innovation lab, he was the producer of Bob Dylan in the 60s and also that of Martin Scorsese. USC Annenberg is a school for communications and journalism and is at the centre of these deep changes that we – as a Society, not ‘we’ as digital media experts are witnessing in this day and age.
“Big data and digital content dissemination will change everything related to the media industry in a fundamental fashion”, Dominique Delport said in his introduction. This  is why we also have to adapt to such changes and deeply transform the way that businesses, but also the Society at large, are governed. our challenge is to reinvent ourselves because we are at the he heart of this revolution. Delport, working in one of the world’s largest advertising agencies, knows more than a little about these things, and HAVAS, he added, has already partnered with universities and other players in the innovation industry, in order to take the bull by the horns. Let us see how Jonathan Taplin sees these deep transformations that we are going through: 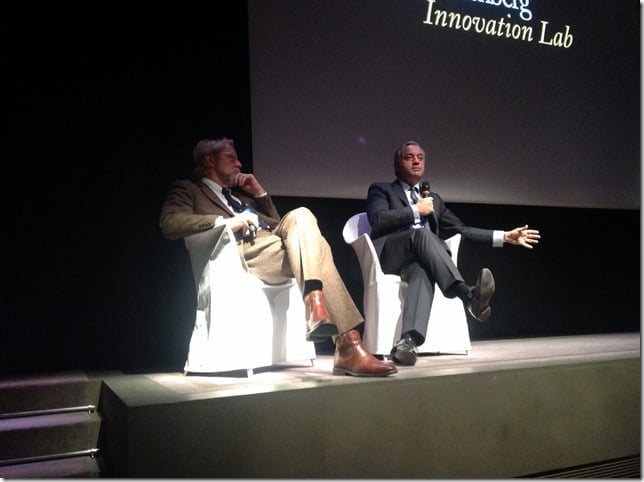 Taplin: “a tumultuous world” … but there are opportunities too
Annenberg Lab been in existence for 4 years, Taplin explained, and it can “boast having many supporters including HAVAS”.
“We are entering a very tumultuous world and one should be prepared for this” he predicted in his preamble. “Last summer, around the end of June I started getting calls from Warner bros telling me that not only what I had told them is happening, but that ‘it is happening way too fast'” he said. Yet, there are many opportunities in this world, however tumultuous it may be:

What’s wrong with the “long tail world”
The problem there is with the long tail world, Taplin added, is that it bears the promise that “little small niches will end up amounting more than the hits … But this is not true. 80% of buys in iTunes go to 1% of the content” he said, and there aren’t probably any signs of improvement in that direction. “This is not a good situation, because media companies like Disney and Vivendi have large libraries of content. If the current audience is only interested in the latest hits these libraries (valued at 10bn $ each) are grossly overvalued” he concluded. The long tail maybe good value for retailers and distributors like Amazon or Apple’s iTunes, but it certainly is more complex for those who actually produce the content … Not to mention artists themselves, at the end of the day, the myth of the solo artist who gets famous via the Web hasn’t happened much if we except justin Bieber.
Spielberg predicted a crash but had been too optimistic
“Media companies are only growing at 5% p.a.” Taplin said,”that’s if they are lucky!” Steven Spielberg had predicted in June 2013 that in the next 5 years “there will be a change of paradigm, but it happened barely a few months later. There’s going to be an implosion” Jonathan Taplin predicted.
As to television, the audience fell 15% because “the younger generations of kids are more interested in having broadband than TV networks” he added. Young people are moving in their own apartments and they are not getting cable because “all they want is a broadband connection”. Almost 70% oft the bandwidth is video (Netflix, 32%, YouTube 20% ..) this could come to France and Europe he assumed, even though we are falling way behind in terms of usage, mostly on the continent which is still very much old world.
The problem with TV networks
“ESPN gets paid for being in 100 million homes. If it fell to 90 million, there would be 50m$ less revenue per month!” He said. They would be forced to issue a subscription service (like Netflix that is to say). But if they decide to go that route, according to Taplin, “they could fall to 15 million homes with cable and still make money”. But if it did happen, he warned, “the 400 cable channels would dissolve. All small channels would go away, content would sit on a server. And content would all be paid by subscription.” Talk about upheaval! 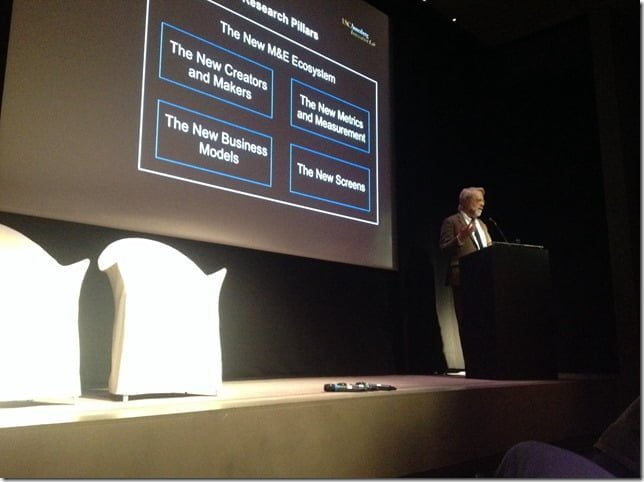 The new media and entertainment ecosystem 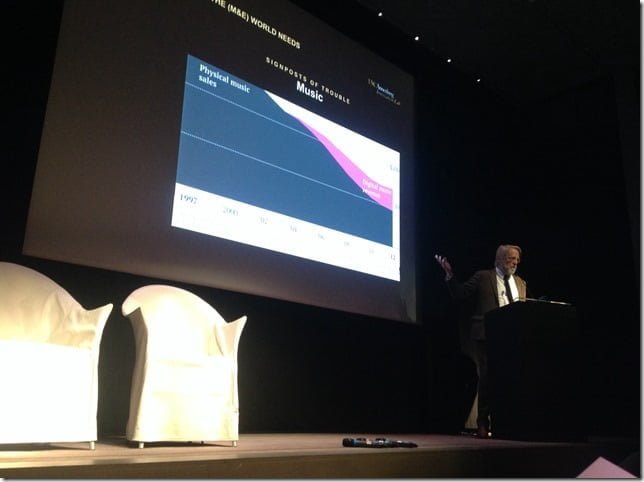 More trouble ahead
There is yet more trouble ahead though, and the next target is advertising, one of the traditional money earners for the media … not to mention HAVAS.

The new model: more is spent on digital than TV!
“The new studios want to deliver content to consumers when they want where they want and these platforms are prolifering: YouTube, Netflix, Hulu, … There are 70 of them!” Taplin said. And they are making new content with new ways of producing (low cost) like ‘house of cards’. We have come to the point of the digital crossover : more is spent on digital than TV
We now enter a new “immersive World” pioneered by Google glass twin added and “the old media isn’t working anymore. The current distribution system isn’t working either. We are working on it Taplin concluded: “This is going to be a 3 year transition with our partners at the lab”. A lot of work on their plate indeed for a very disrupted and broken market.
Jonathan Taplin is a Professor at the Annenberg School with areas of specialization in international communication management and the field of digital media entertainment. Taplin began his entertainment career in 1969 as Tour Manager for Bob Dylan and The Band. In 1973 he produced Martin Scorsese’s first feature film, Mean Streets, which was selected for the Cannes Film Festival. Between 1974 and 1996, Taplin produced 26 hours of television documentaries and 12 feature films. His films were nominated for Oscar and Golden Globe awards and chosen for The Cannes Film Festival seven times.