On February 24th, 2013, we paid a visit to the Grand Fira which is the brand new venue for the Mobile World Congress conference in Barcelona. Everything here is brand new and even though they built dummy columns at the entrance to remind visitors of the old place it is certainly lacking the lustre of the old romantic buildings at the end of the old Fira convention centre, situated in Plaza de Espanya.

Nonetheless, the new venue is – as the name goes – even bigger, and we can expect a lot to happen by way of innovation on the stands. The promise is that a new horizon for telecommunications is ahead of us.

One, mostly, where NFC will be playing a role since the three letter acronym is absolutely ubiquitous. The press is even asked to check in through NFC gates exclusively and I was quite disappointed that I hadn’t taken the time to renew my phone and buy a brand new Galaxy SIII for instance. 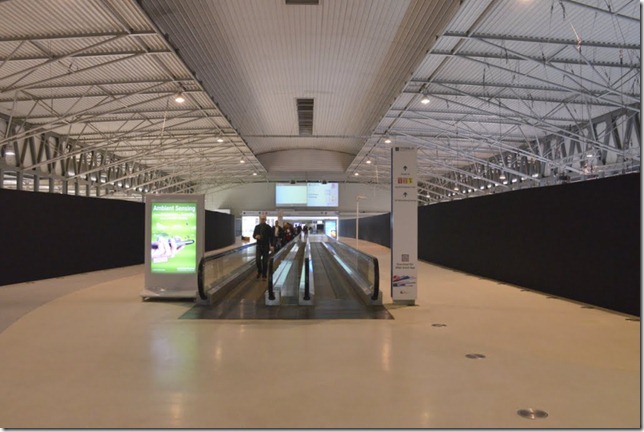 [nothing is shown at MWC on the eve of the event. All is quiet… not for long!]

Talking about Samsung, we were greeted by a small stand of theirs at the exit of the Fira metro station. This is probably a sign that they are going to show big things this year. On the other hand, so far, we haven’t seen any signs of Android being at the forefront, but it’s not clear as the venue is always decorated at the last minute to avoid leaks.

Last year was definitely an Android year. Does it mean that Google – I heard that rumoured yesterday – would toy with the idea of renaming its mobile OS by using its main brand (as they did with Google Play which replaced the former Android MarketMarket definition in B2B and B2C - The very notion of "market" is at the heart of any marketing approach. A market can be defined...)? Or does it mean that new big guys, like the Mozilla foundation for instance, are sticking their guns this year.

A new OS in the mobile environment is a possibility. Time will tell, I am all set for the press conference on new mobile Operating systems as well as the much expected Zte announcement. Stay tuned to the live Orange blog!