Stephen Harrison (photo), Chief Executive, Nation Fraud Authority (NFA) delivered a presentation on June 28 regarding the importance of fraud in advanced payment methods in the UK at the marketforce future of cards & payments conference.

UK payment fraud: NFA says the devil is in your details! 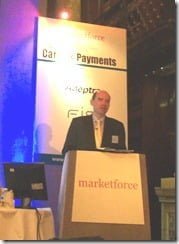 The National Fraud Authority was set up by a response to fraud by the UK Government in 2006 in order to understand fraud risks and develop partnerships to counter it. the NFA is part of the Home Office. The idea is to get a better handle on the reasons and the extent of the fraud. NFA came with the annual fraud indicator in 2012. Here are some of the metrics taken out of the report:

“We are also talking of personal tragedies with people who have lost their life’s savings” Harrison added, “it’s not just an economical problem”. Focusing on the private sector (£45.5 billion). Payment frauds had impacted 71% of victims. The not for profit sector has lost £1.1 billion only and 43% of respondents had been victims.

Online banking fraud remains quite low and falling though. Plastic card fraud is by far the biggest, a little below £350 m in 2011 falling slightly from 2010 (see picure above). “It’s not always the case that the Banks are refunding individuals and there are cases in which there is a huge impact on individual users” Harrison said. Yet, whether it’s due to complacency or lack of education (or both), many consumers aren’t really protected from fraud.

How to make consumers part of the solution?

“It’s about changing behaviours” Harrison said, and the NFA is trying to work with the private sector. The “Devil’s in your details” campaign funded jointly with telecom operators. Here are 2 examples taken from the NFA Youtube channel.

NFA didn’t have the budget for a TV commercial and using the Internet and Youtube was cost effective: “it cost only £0.068 per person who saw the add” Stephen Harrison said.
After Stephen Harrison’s presentation, there was a panel with Karen Tyler, Head of Fraud at Santander and Debbie Strickland, function leader, Cooperative financial services. Here are some of my notes during that panel: