Is social media a gimmick or not when it comes to businesses?   On May 16, I delivered a keynote at the Ronewmedia conference in Bucharest, the capital of Romania. Ronewmedia will actually change names, in order to become ICEEFEST, that is to say, the Interactive Central and Eastern European Festival. The change is far from being trivial. As Dragos Stanca, founder of Ronewmedia states in his introduction, Social Media is no longer new, it’s not just about media and the conference has gained enough momentum to gather people from all the region (there were representatives from many other Central and Eastern European countries among the delegates as well as from Western Europe and America). I had prepared an interview for them, which was published in their magazine. Here it is.

How important is social media now for companies and brands? 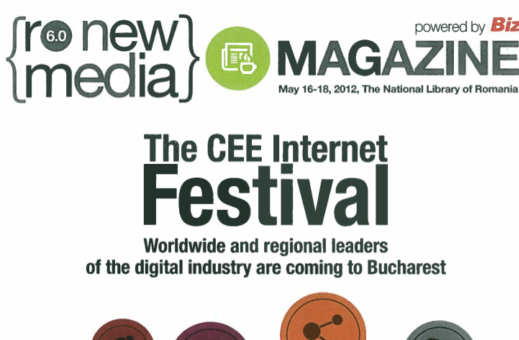 Well, to start with, social media is not something new at Orange. We’ve been working around this subject, whether it be content marketing around blogs and stuff like that, or social networks and internal social networks, for more than five years. So it’s really important, and we’re now in the third stage of the development of social media at our company.

The first stage was around convincing management that something had to be done, so we had to prove a point, and prove a concept really: “we’ve done this and that, and it works”. Then the second stage was around the development of our communities. To an extent, a lot of companies are still there at this moment. They’re trying to develop their fans base to the maximum, but we’re not really there anymore, it’s something of the past. Now we’ve moved on to another stage which is the structuring of our social media initiatives, whether it be at the group level or country level.

Social media is in everything we do: marketing, product marketing, customer relationship management and communications of course, but not only, so it’s really important to us.

And how do you see the role of social media in the near future?

I see it as really evolving. I see the future of social media a bit like the future of the Internet. When we were talking about the Internet 15 years ago, we were talking about something which was done for experts. So a certain number of people, usual geeks, were doing that stuff and nobody else understood it.
Now, the Internet is in everything we do. You can’t actually think about doing marketing without doing online marketing. I even know companies which are in B2B for instance and do nothing else but online marketing, because it’s more effective, it’s cheaper, it’s better, it’s faster… So, even for B2C companies, online has now become part of everything we do, and social media will be just like that. I suspect that within three to five years, we won’t talk about social media anymore. And I think one of the future aspects of it is that you won’t have a social media in one particular social media team, but it will be spread across the entire organization.

So how does Orange manage its social media activity?

To start with, the social media activity at the Orange group is something which is very dynamic and which involves a lot of people. I think there are about 200 people in charge of community management at Orange, at different levels, in different parts of the organization in all parts of the world. We have 35 countries and Orange Business Services in 220 countries and territories.
Most of my role is about the coordination of this. It’s not something which you can actually scale at Group level, so it wouldn’t make sense for us to manage social media for the entire world, it wouldn’t be possible for anyone to do this. What we do is liaise and create some sort of network of people working on social media in the whole world.

So what does that mean at Group level?

At the group level, it means we have a team here which is aimed at developing our social media presence and traction, as engagement is very important, but not just in isolation. We work on social media engagement in order to support our other online activities and content strategy. So I don’t think that social media as something being separate from the rest of the digital online activities; on that level, from the website down to Pinterest, everything is covered by the team. We don’t have one special community manager on each and every platform; we actually manage several communities and link everything together, which makes it easier.
Another part of our work, which is probably more than 50% of what we do, is to work on coordination and governance, and liaise with others through what we call the “Social Media Champions”. This program is aimed at turning all our employees into ambassadors for the group and the brand, as long as they want it.

So how do you personally use social media for your job?

I’ve been using social media for quite a long time now. I’ve been writing online for 17 years, and if I consider the rise of social media in 2004, then I’ve been using social media ever since, beginning with Linkedin, and then Twitter, in the year 2006 or 2007, and then Facebook and other tools. In fact, I use social media all the time, and it probably means that I work all the time!
I use it a lot for my business and for a variety of things; in fact, it’s a bit like my backbone. Social networks and social activity is the backbone of marketing. Marketing is about talking to people, interacting with people: be they customers, vendors or your peers, you want to exchange with these people.
Before I come to work in the morning, I usually write on my blog, visionarymarketing.com, and I’ve been doing this for a long time now and honestly, I wouldn’t understand life without this, because everything you want to do you want to share with people. So sharing is my middle name…

And so what are the major benefits of using social media in your private life?

The fact is I use very little social media in my private life. I do a lot of e-reputation and work on contact management and content which I’m interested in, like marketing and e-marketing for instance, which are my main subjects.
The most personal things I do on social media is probably my blog about paintings, pictures and photographs and not much else really. I tend to use the Internet for personal reasons in a very limited way. I don’t want to mix up my personal and professional life, and I usually tend to keep private things private. For example when I take pictures of buildings, architecture or landscapes, then I put them online and I share them on Picasa mainly or Flickr. Then they go through all the blogs, Twitter and everything else. And I use Instagram a lot of course. If I take pictures of people, then I don’t share them, it’s as simple as that.

So to conclude, do you have any advice to give regarding the use of social media in a professional environment?

Your professional environment is something you have to be very careful about. You always have to give a positive image of what you do. So if you really feel like tweeting something dodgy, then just don’t do it.