The gaming experience on tablets isn’t really what it should be, but all this may change soon thanks to Immersion, a San Jose based company which was set up 18 years ago to develop force-feedback controllers for joysticks and other gaming equipment manufacturers such as Sony, Logitech etc. Immersion is now moving into mobile gaming and is working with mobile and tablet device manufacturers to add force-feedback into mobile gaming.

Fancy playing Grand Theft Auto on your Android tablet with the same kind of user experience as you used to have on a console or personal computer? Well, this is possible, and I even tried it, and it works. Immersion, a Nasdaq listed company, based in San Jose, Cal. has developed drivers which make it possible for old games like Sonic or GTA to be played on Android tablets with a more satisfying experience. 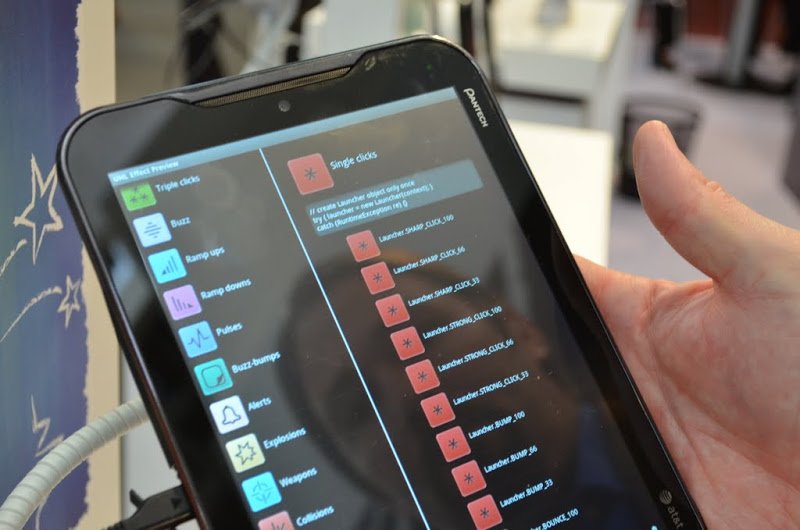 Thanks to the technology developed by immersion, one can get force feedback when slamming the doors of a car or bumping into cars or buildings (don’t try this in real life!). The device is no longer passive, and therefore you can have the best of both worlds: the mobile world and the retro game world.

The company is more or less in “stealth mode” to put it in the words of the person I interviewed on the stand, hidden behind large manufacturers of Android tablets that wish to use retro gaming as a means to attract consumers to their Android-based tablets. “Android is an open-source,” the immersion representative said, “and therefore, one can gain a lot of control on the platform”.
a new haptic experience

This new haptic experience is made possible through the registration of 1,200 patents, the immersion representative declared. “The software is free” he added, as “we want developers to be able to use it and develop on it; they produce good content, and that makes it possible for us to partner with manufacturers such as Samsung, LG, Toshiba, Fujistu to name a few”.

As Glenn Le Santo pointed out in his story on the Live Orange Blog, the mobile world congress is not just about large brands but also myriad small companies which are part of this ecosystem and make it thrive.