Sharon Crost is Global Online Marketing and B2B Social Media Manager at Hitachi Data Systems and she delivered what I believe is one of the most inspiring presentations on March 27 at Blogwell in San Francisco. B2B, it didn’t come as as surprise to me ( I made a presentation at an earlier edition of Blogwell in Atlanta a couple of years ago on that subject) is one of the major targets for social media. Here is why, in 5 questions, asked and answered by Sharon in front of a riveted Blogwell audience.

“HDS products are not sexy” was Sharon’s introduction to her pitch at Blogwell. It doesn’t seem very intuitive that social media could work out for products like that. Yet, it proved very rewarding for the storage and data recovery company. In just five questions, Sharon proved her case very compellingly. Here is my account of her punchy presentation.

Although many of the people in the room anticipated the answer to that question to be a “yes”, Sharon explained that they “were not so sure at first sight because it’ wasn’t an obvious thing”. So they “needed to test it out” she went on. Being a B2B company, they didn’t have much of a presence at first and even with a very small budget, which was used very effectively they managed to get some very good results. 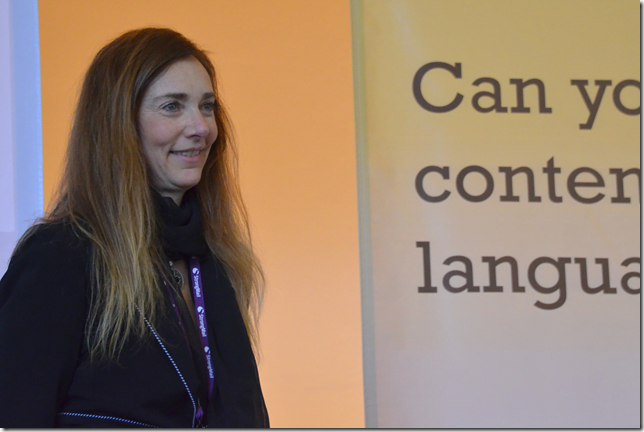 They started with a test of a quiz campaign in which they tried to get people to engage on social media. The prize was a Hitachi LCD HD TV set. This campaign drew people to their social site to answer the quiz. Another campaign was the “globe campaign” and you had to spin the globe and click on the tweets, the whitepapers etc. A third one was entitled “a quest for scalability”…
Sharon concluded that first chapter by saying that “the first lesson is to think about what is socially sharable about your brand and this may not necessarily be your products!”.

Q2: if people aren’t in the target marketMarket definition in B2B and B2C - The very notion of "market" is at the heart of any marketing approach. A market can be defined..., should you discourage them?

Her answer was neither yes or no this time. “In fact you have to be nice to everyone (you never know), but you have to treat them nicely but differently”. For people in our targets we let them win a “storage assessment” she added; those who won TV sets were kept happy but they weren’t forcibly part of HDS’ audience.
The current campaign is a storage mapping tool. People can still engage to win an iPad “but they aren’t the target audience” Sharon added. Target customers or prospective customers are also given a chance to opt-in for free information.

Q3: can you do that on a shoestring?

Sharon’s answer is a resounding Yes! (and all voted for that answer in the room). Earned is the most important part, but “paid” comes to amplify the message. 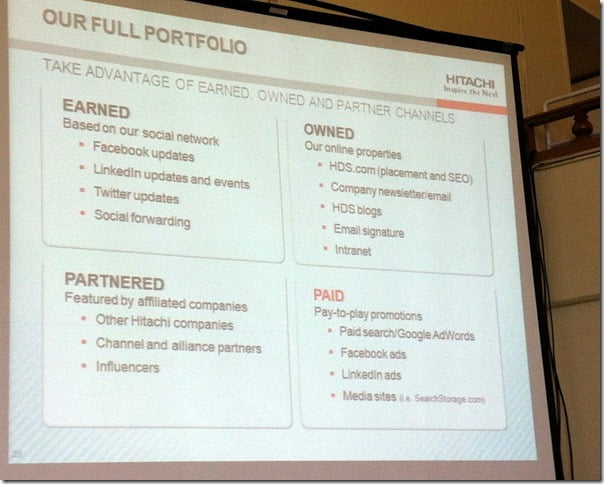 The answer to that question is very counter-intuitive and it must be pointed out that it might very well work differently depending on the brand or mostly, where it’s based. The very footprint of Facebook in the US is making it unavoidable. And therefore, HDS found out that it was indeed Facebook which worked best for “with a small amount of money [they] could see the ROI for each channels and Facebook proved the more rewarding” she concluded.

Q5: what is the most obvious benefit for B2B?

There isn’t one answer to that question Sharon said, and she listed a number of benefits including

The results for Hitachi Data Systems were tremendous and way above the initial goals. For whitepapers only, 9,000 of them were read said Sharon, a tremendous result when you think that most B2B companies will pay – not always wisely –  big money for doing this.

is there an internal program at Hitachi Data Systems ?
There is an internal social media ambassador network. HDS wants to show its people they are encouraged to retweet, share the information and be twitter/Facebook champions. and they can also win an iPad. Sister Hitachi companies provide the freebies.

Japan
It’s not easy because they don’t have the same culture in Japan (it’s “closed versus open kimono” she said). They don’t want to respond to any tweets. A big struggle took place but they were able to show them the purpose and they eventually were retweeted but “you had to show them first that you respected their culture” Sharon concluded.

Metrics
Hitachi Data Systems have a major social media dashboard which they publish twice a year and they use it to show stakeholders what major benefits and issues are at hand and how many clicks are generated for instance (like 9,000 on whitepapers and how much you’d have to pay for such clicks)