I had the opportunity to attend a Press conference organised by Kaspersky security. Eugene Kaspersky himself was present for this big announcement in mobile security. The firm is already widely known for its PC protecting suite and today it made a few important announcements related to its release of parental control suites for mobile devices as well as an advanced protection suite for Android devices.

Kaspersky says cybercrime explosion in the mobile world is near

In a flamboyant presentation by one of the Press’s preferred showmen of the software industry, the Russian expert and businessman highlighted the risks that mobile users are facing in the near future. Yet, there have also been criticisms in the industry for scaremongering on the part of security software editors.

Mobile cybercrime will soon be too big to be ignored

15 years ago, Personal computer users didn’t have a clue about cybercrime. Viruses didn’t exist or were in limited supply, and when they did exist they tended to be rather harmless. Similarly, as of today, many users are still wondering whether cybercrime is real or not when it comes to mobility. Nowadays, PC users aren’t questioning that “malicious software” (aka malware) exists nor that it is a real threat. We all know it’s there and that having a proper antivirus installed and regularly updated is a must-have.  Such was Eugene Kaspersky’s introduction, meaning to announce that cybercrime is just about to soar in the mobile industry.

”IT will split into 2 environments: Android for the home environment and Business with the Windows environment” Kaspersky announced, even though Windows and Nokia my prove him wrong soon as it happens; but we understand what he is hinting at: open environments like Android are easier to pry into and are the prime targets for cybercriminals.

“No safe zone will subsist” he added

Going back into the history of computing, viruses like Chernobyl in 1998 were so fierce that they made infected machines unusable. The virus would go and reprogram the BIOS (the basic software below Windows which makes your machine work) and damage it beyond repair. This virus and others like Melissa or “I love you” changed people’s minds about cybercrime for ever Kaspersky rightfully remarked.

Cybercrime is moving into mobile telephony 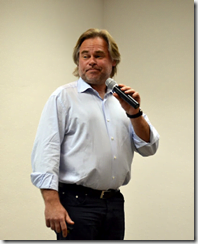 The Russian expert’s theory is that mobility is going the same route as computers a few years ago because, in his mind, “there are fundamentally no differences between computers and mobile devices”.

“The number of computer threats has reached a plateau” he went on, so there are few or no new players in the PC cybercrime space or otherwise, they would need to be extremely professional.

The computer crime scene is therefore mature enough and there are also other non-malware related scams which work well in that space (SPAM, phishing, pharming being the most frequent ones).

“Online banking only started in 2001-2002 and this is the reason why crime soared too after those days”, now that mobile equipment is booming (in 2012 there will be more than 484 million smartphones worldwide) “we will witness mobile ‘malware’ explosion” Kaspersky warned while showing us a chart (see picture above) with some very worrying numbers.

“75% of malware is targeted at Android”

“Cybercrime in the mobile industry started as soon as 2005” he added, and Android is now becoming the dominant mobile malware platform. (A sign of the times, Android went through 1199 modifications in Dec 2011 because of security threats).

Eugene Kaspersky said that he was expecting this to happen and he is now “sure that the trend will follow that of computers in 2000 and beyond. “This is bad news for smartphone manufacturer who will need to add extra processing power to cater for security,” he said and added facetiously “this isn’t my fault!”.

As the above chart shows, things started to get very bad in 2010 and mostly in 2011. And it’s not just mobile devices and tablets he concluded but all connected devices such as TV screens namely.

How to protect your device

But it wouldn’t be right to scare all mobile and tablet users without giving them good and straightforward advice with regard to the protection of their devices. And apart from the security suites sold by Kaspersky (and its competitors), common sense is a good method for keeping your mobile data out of harm’s way. Here are Kaspersky’s recommendations:

Kaspersky and his teams, fortunately, do not predict that a mobile IT apocalypse will take place in 2012 but they are pretty certain that Android will be the main target for massive attacks and that 2012 will see the rise of the first massive worms for Android as well as ‘malware’ in official marketMarket definition in B2B and B2C - The very notion of "market" is at the heart of any marketing approach. A market can be defined... applications.

A critique of software security companies’ approach to malware protection on mobile devices (not just Kaspersky’s) was fuelled last November by Chris DiBona, leader of open-source software at Google.

Kaspersky’s Denis Maslennikov dismissed DiBona’s claims by saying that Google had launched their own antivirus solution soon after. A complete thread of the Kaspersky/Google story is available at this URL. It’s a bit early to tell who is right and who is wrong however even though there may be a bit of truth on both sides. Time will tell.

The Russian Federation is known for its high concentration of online crime perpetrators but also for being the home of some of the world’s most revered security experts. Kaspersky, named after its founder and CEO Eugene Kaspersky, a math lover who used his skills to make surfing safer is one of the leaders in that space. You can find details about their offerings at Kaspersky.com