Ehealth is no longer a dream and we had further evidence of this at Mobile World Congress today in Barcelona while visiting the “connected house” pavilion. Let’s zoom into these solutions of a very very near future in which our health and namely that of elderly citizens will be (ethically) monitored and surveyed at a distance.

Qualcomm is a fascinating company. Its history goes back to the late 1980s a time at which it was doing m2m (machine to machine communications) for the transportation sector under the omnitracs brand name. 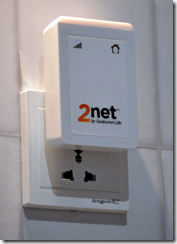 The early 1990s saw Qualcomm moving into the mobile chips business (in actual fact, they even produced handsets before selling that division to Ericsson) for which it is known to all but their recent move is a radical one and it’s called Qualcommlife.

Qualcommlife is an independent spin-off from the main company with a funding of $100m (out of the total $500m which are part of the Qualcomm VC fund) I was told by the Qualcomm representative on their stand at Mobile World Congress in Barcelona. Qualcomm life launched towards the end of 2011 and has now signed an agreement with Orange regarding its brand new NET2 platform, as depicted in the press announcement on the Orange.com website.

Health monitoring isn’t completely new I must admit. I remember our first demos at Orange labs in Paris more than 7 or 8 years ago! Yet this technology is slowly and surely becoming mainstream and this is made possible through the understanding that users want technology to get the job done and not spend hours fixing the wifi or Bluetooth interface of their phone.

This is exactly what NET2 is doing for you: “grandma doesn’t want to fiddle about with the wifi so we had to build an intelligent device which would pair automatically” the Qualcommlife representative declared. The Net2 gateway (which will be powered by Orange from a network point of view) is meant to do just that.

NET2 is a platform which enables patients to connect their devices (weight scales, blood pressure monitors, glucose monitoring devices, …) directly without any complex pairing procedures. “All you have to do is plug in the gateway and it will find the patient’s device automatically Qualcommlife said.

But there are more than many ways of connecting to your GP than the NET2 gateway: standard mobile devices, and embedded devices are also possible. You may even connect your treadmill to a remote monitoring device and record your data as seen in the following picture taken in the Connected House pavilion.

At last, here is a simple and promising way of enabling remote health checks, enforcing the remote monitoring and the surveying of patients with diabetes or a heart condition for instance, in a seamless and easy way. At the end of the day, “national health authorities might even be enticed to encourage the development of such systems in order to enforce country-wide health programs” the Qualcommlife representative added.

This is a major step forward and one more proof that innovations take approximately 10 years to settle and disseminate.