The Chinese Internet is now conquering the world. In a previous series, Alban Fournier, a young French professional who fell in love with Asia warned us that China was the next worldwide International giant in the making. In this piece, he is expatiating on this previous report and delving into the details of what makes Chinese Internet players stand out from the crowd.

What is currently planned at Alibaba, Tencent, Sina, and Baidu is worth further investigation, hence this sequel to my initial piece on the Chinese Internet. My duty is to continue the story published last year and called “Chinese Internet industry ready to grow beyond borders”.

People were quite sceptical in 2008 when I announced that China, as a country, was good at disruptive innovation following a trip to Beijing. At that time, I placed my bets on a Chinese Internet becoming almost the only alternative to its American predecessor. Who would have imagined that change would accelerate so much at the very beginning of 2012?

China has the world’s largest Internet traffic thanks to its population, the world’s biggest with more than 1.3 billion people. With the strong increase of its Gross Domestic Product, extraordinary engineering talent, plenty of venture capital, Chinese entrepreneurs and large firms now have the necessary resources to compete worldwide.

From a social behaviour point of view, there is a fundamental difference between American and Chinese people: in the U.S.A. (and in Europe too) a majority of online users are “spectators” while a majority of users in China are “creators”. China is therefore much more active marketMarket definition in B2B and B2C - The very notion of "market" is at the heart of any marketing approach. A market can be defined... and its users generate a lot of UGC (user-generated content) every day. This discrepancy is one of the reasons behind the success of QQ games, a Tencent service dedicated to free online gaming.

Now that Chinese Internet players are giants at home, aren’t we just about to see them thrive beyond borders?

Outside China, in addition of being active in the U.S.A., Russia, India, Vietnam, Thailand, Tencent acquired a majority stake in Riot Games, a Los Angeles-based developer and publisher of online video games. In 2010, Tencent invested $300m in Digital Sky Technologies (DST) of Russia, bringing two internet powerhouses of the emerging markets together in a long-term strategic partnership.

Alibaba prepared the future of Alipay reaching an agreement with Yahoo!, and SoftBank. Alipay is a leader in China in providing payment processing services. Alibaba also developed operations in the U.S.A. and formed a partnership with Turkey’s Logo Group to reach Turkish companies.

Among others, Renren and Dangdang are listed on the New York Stock Exchange. We can expect more US IPOs by Chinese companies. There are at least 10 Chinese Internet companies which have made confidential filings through the Security Exchange Commission. Those Chinese tech companies aiming at an IPO are also growing their business through innovation. 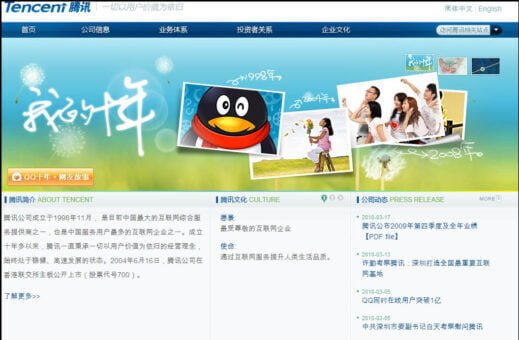 Founded in November 1998, Tencent has grown into China’s largest and most used Internet service portal. In its ten year history, Tencent has been able to maintain steady and fast paced growth. In 2005, Tencent entered the social network market with QZone and Internet shopping with PaiPai.com platform. In 2006, the firm decided to compete directly with Baidu and Google with the launch of the Soso search engine.

Tencent’s QQ Services is China’s largest and most used Internet service portal, with the largest customer base in the world. Key platform statistics are 647.6 million of active Instant Messaging (“IM”) user accounts and a peak of simultaneous online IM user accounts of 127.5 million. Active user accounts of Qzone, a social network included in QQ Instant Messaging, numbered 492 million.
R&D staff group is large at Tencent. The company has obtained patents relating to the following technologies: instant messaging, on-line shopping and payment services, search engine, information security, gaming, and many more. In 2007, Tencent invested more than RMB 100 m (note: RMB stands for Renminbi, which is the other name of the Chinese Yuan)  and in setting up the Tencent Research Institute, China’s first Internet research institute, with campuses in Beijing, Shanghai, and Shenzhen.

The institute focuses on developing core technologies.  The revenue of the firm increased by 57% in 2010 compared to 2009, which means that Tencent is now more profitable than Microsoft Online or Google.

The business model of Tencent is not only based on advertising but based mainly on revenue generated by users and online sales. The firm is very well positioned in latter market. Furthermore, it has already a large user base which it can leverage. Online sales in China are a fabulous market for Tencent. We can expect at least a 35% increase per annum in the three coming years.
Estimate in growth of revenue generated by virtual micro-transactions will be outstanding according to Strategy Analytics[6] compared to 2009, the global market of 2015 will be multiplied by seventeen (from US$ 1 billion to US$ 17 billions).

As a conclusion, you now know that the Internet industry in China and Tencent, in particular, are rather successful on their home turf. Now you must be wondering whether Tencent or any other Chinese Internet firms will decide (and when) to go beyond its borders and tackle the rest of the world.