Red tape is good for business! So I read in an article published in the “briefing” section of Time magazine dated November 14, 2011 (“The Deregulation Myth: Ignore the rhetoric, nations with more rules grow faster). 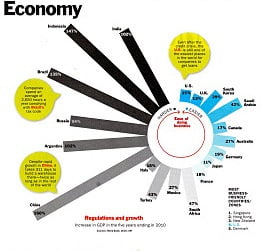 In this article, Time magazine have produced their own info-graphic from data taken from the World Bank, OECD and the IMF.

Their diagram (thumbnail picture on the lefthand side, buy a reprint for details) shows that it’s easier to do business in many countries in which it is customary to say that it’s not easy to do business.

Beyond the obvious first two contenders (US and UK) we find countries not always hailed for their lack of regulations like Saudi Arabia, Australia, Germany, Japan… And France!

Despite what whingers are saying, it is, therefore, easier to do business in those countries. The criteria set by Time magazine used to determine this index are a mix of tax code, loan availability, and numbers such as “the number of days to build a warehouse”; this index is set against the growth of GDP.
From this diagram we can conclude two main things:

As a conclusion, entrepreneurs may be reassured that going through the red tape may in fact be probably good for their own business.