This morning the first-panel discussion at the Istrategy digital conference in Amsterdam was entitled “Audience Engagement, User Experience and Social Monetisation”.

Angry Birds: no one has cracked the value of a Facebook fan

Amber Osbourne kick-started the panel by saying that “you have to forget that you are B2B or B2C, you have to become P2P, People to People” and that you have to find the “Rockstars” in your company. She then explained how she was hired by Bruce Food in order to build a Social Media personality for the brand just because one day she tweeted about her having Bruce’s Yams for breakfast and that her audience started a letter campaign to Bruce foods saying “you should hire this girl”. 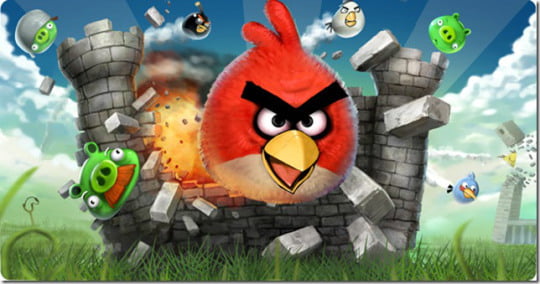 She is now the Head of her Social Media agency.
Saara Bergstrom said that you “should do your Social Media in house”. She went on saying that all the relationship between the brand and its fans at Rovio is done in house. It has to be stated that Rovio is the company behind the famous ‘angry birds’ game (see picture above).

Tom Eslinger added that it has to be a mix (a point I made a few times already, and namely in my book which is being adapted in English), that “you can’t do everything in house” and that you have to do both. The issue he said, is how you cope with the continuous content creation in order to keep engaging with fans and clients. Saara Bergstrom addressed that question by adding that “a good story always begins with a great product” and it’s certain that the success surrounding the angry birds project is generating a lot of axes to grind for content creators at Rovio.

Rovio is using its Angry Birds Facebook page in order to do crowdsourcing with its fans in order to evolve the game (see above screen capture from the angry birds facebook page).
Holland’s most successful social network is Hyves. Yme Bosma from Hyves stressed that when you are innovating, one had better believe in one’s own passion rather than ask “customers” what they think because you won’t get any response.

But, Tom Eslinger added, once you’ve gathered all these fans, how do you monetise this activity?

Ritch Sibthorpe – VP Digital Marketing & Content Partnerships, Warner Music – stated that it depends on the kind of business you’re in and there is no doubt that the music industry is trying to find new business models at the moment. Warner said that the real challenge is about how you manage a community of 35 million fans, which is creating quite a few issues. Amber Osbourne once drew from her personal experience and quoted that example in which she was tweeting about Audi and how much she loved the brand and how, after renewing her driving licence after ten years without driving, she was offered to drive an Audi A7 to Vegas through Twitter. It must be added though that she has raised her personal profile to levels which few can match, with a near 20,000 follower Twitter profile. I trust that she is able to pass this knowledge to her clients and make them grow in a similar fashion. In a way, her point is very valid, since she is pointing out that monetisation is working the other way round, i.e. not by growing one’s audience but by engaging your brand advocates.
A lot of other examples for brand advocacy were drawn from the music industry like Kate Perry or Duran Duran however, but it must be remembered that music had its fans – mainly Duran Duran who were at their highest at the beginning of the 1980’s – but that this doesn’t apply entirely like that for everyone.

Rovio: no one has cracked the value of a Facebook fan

Sara Bergstrom said as a conclusion that no one has really cracked the value of a facebook fan. An issue which is even made more difficult with a recent case brought by an Austrian student who is suing Facebook for creating fake (aka phantom) profiles. All panellists agreed that there is some possibility of measuring metrics for success in word of mouth but they had to be taken with a pinch of salt. Ritch Sibthorpe added that the worth of Facebook fan is worth pretty much depends on how creative the brand is.