“Diaspora isn’t about killing Facebook or Google+,” the people behind the new social media project claim on their newly opened wall, “it’s about reinventing the social web“.

I was very lucky to be granted access to Diaspora, in alpha version, thanks to an invite sent by our fellow Like Minds Alumnus James Barisic. At first sight, Diaspora looks very much like Google+ with its “your aspects” links on the left-hand side, which link to Friends, Family, Work relations and acquaintances.

Diaspora, the open project to rekindle social media (not to kill Facebook) 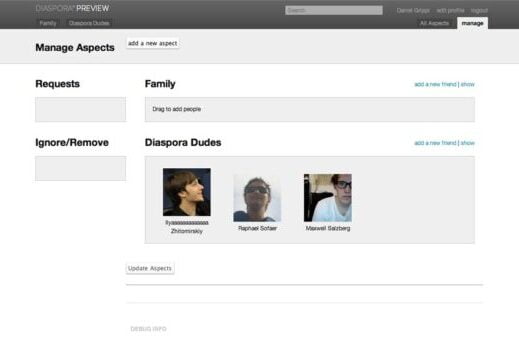 Skiormas Istraidės, a new Diaspora user spotted it: “it’s a little bit more elegant than G+. However looks very similar yet” he posted for all to see. But the real issue lies beyond the graphical user interface. It’s about the open Web and tearing down these walls (as well as respecting privacy maybe).

Here was  Diaspora’s Yosem Company’s answer, which I am sharing with you:

“Yosem Companys – 7 days ago – 101 reshares
I’m re-posting this comment I wrote, as some folks said they’d like to reshare it:
The media has painted us as the David that will either slay or succumb to Goliath. (Insert FB or G+ for the Goliath, depending on the media’s narrative.)
It’s also a function of competitive differentiation. You only know what something is by comparing it to something else that exists. The media has chosen to compare us to FB & G+, which is understandable.
The better comparison, however, is AOL vs the WWW
When AOL appeared on the scene, it was the only commercial email provider. You couldn’t send email to Prodigy, for example, from AOL, and vice versa. AOL would force you to navigate the Internet through AOL’s portal. Then the (free or open-source, use your preferred term here) WWW came on the scene. Soon thereafter came communication protocols that enabled different email providers to connect their users with each other. AOL clung to their walled garden approach and slowly over time was transformed from a monopolist into just one of many actors on the open web.
Fast forward to today, and you find a similar situation.
FB doesn’t allow its users to message G+ users, and vice versa. FB forces all applications to use their API, thereby losing the richness of the larger web, forcing applications to conform to FB’s development environment.
D* is not trying to kill FB or G+. Like the WWW before it, D* is trying to reinvent the social web from one that relies on walled gardens to one that is open to all players. We believe the world will be better when users own their own social data and decide with whom to share it with, regardless of where these users are online. There is no reason why you shouldn’t be able to communicate with G+ users from FB, and vice versa. There is no reason why you should be forced to use pre-approved FB apps instead of any web app available online in its native environment.
D* wants to enable you to own your own data and enjoy the open web in a social way. It’s not about killing G+ or FB. It’s about enabling users to own their own social data and have the choice to use any service they want, which will force the walled gardens to provide better services, lest their users leave and take their own data to other services online that provide these for them.