Aisis will be driving growth in emerging markets, Adrian Ho from IDC declared during his “new technologies & future priorities for IT departments” presentation. He was replacing Sandra Ng who unfortunately couldn’t attend that meeting.

IDC: 70% of future growth in emerging markets will come from Asia

Asia is shaking the world 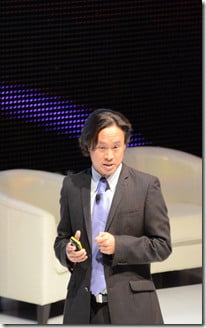 Adrian (right) explained some of the most important drivers behind Asia’s growing importance: demographics, new middle class rising, mobile everything, smart/connected cities in increasingly big / mega cities and all of this is delivering hyper growth: 70% of future growth in emerging markets will come from Asia, Adrian said, 40% of which from India and China.

Time to marketMarket definition in B2B and B2C - The very notion of "market" is at the heart of any marketing approach. A market can be defined... mantra in Asia: “speed, speed, speed”

But the mentality is very different from other parts of the world in Asia: Flexibility, customisation and speed of execution are extremely important. Clients expect flexibility and on-demand customisation. Speed is of the essence too, when it comes to time to market.

Yet, the other side of the coin is that Asians also expect 25% pay rises otherwise they will leave your company for another one. There are also leading business concerns & priorities such as Escalating cost of operation and expansion.

Unified communications in Ho’s mind is a re-invention of past video and audio conferencing and other concepts brought into it. Social Media is really about “knowing one’s customers” Ho said, and when Unified Communications is linked with Social Media then it starts meaning a lot.

The workspace of the future is almost, it’s not the collaboration tools though that are exciting, it’s the white boarding features that are attached to these new tools. As to mobility, it is now becoming mainstream with the introduction of tablets in first class airline service in some Asian countries.