On March 29, at Blogwell, I attended that presentation by American Express Pepper Roukas, on the members project campaign. Amex has focused a lot about brand management on social media, but this particular business case is about how to drive business through social media. 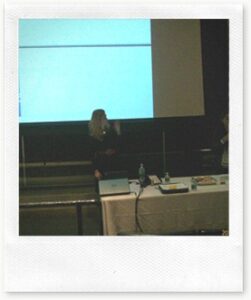 Amex coined the term “cause marketing” with its restoration programme of the statue of Liberty in 1983 and many others in 93, 2003 an 2007 with the members project.

The questions was how to create a differentiated cause-campaign? The answer to that question was to educate consumers that small steps can make a big difference in their communities and provide the enablement tools.

Fish where the fish are 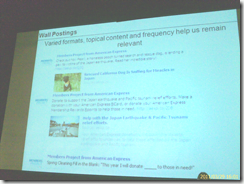 Facebook was the place where Amex’s fans were, so Amex used it as the main starting point.  The focus was on more engagement with members, sharing content and initiate dialogues.

Members were encouraged to volunteer and earn membership points and donate them. Amex therefore helped people support their favourite charities.
Donations could be done straight from the card or by transferring membership points.

Wall postings were personalised by members, posting photos (right) but also videos. more videos were used by members than ever before. A number of apps were developed with which people could share their stories. The campaign was carried away in 360 format with on-air TV commercials and charity-themed sweepstakes. A partnership was set up with the Glee TV series.
All other social media channels owned by Amex were used to relay the campaign too.