Data and storage networks used to be separate, but thanks to Emulex and networks convergence, this is about to change. Our last but one visit in Silicon Valley on November 18 was with Emulex, and we were greeted by Steve Daheb, CMO & SVP business development and Shaun Walsh, VP Corporate Marketing.

Emulex is driving networking convergence in the data centre 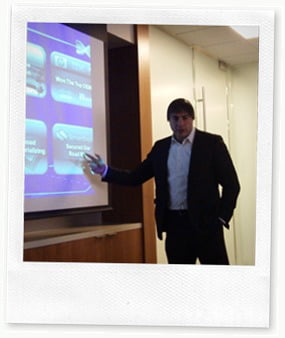 The Emulex vision is about the realisation that networks were about to converge for the first time: data networks used to be separated from storage networks.

With the advent of 10Gb ethernet we are seeing things converge. Emulex is a 30-year company founded in 1978, based in Costa Mesa, Calif. with 960 employees.

Emulex works with HP, IBM and all other major companies. Emulex is also a great partner of Blade Network Technologies’ which we have visited previously.
There are 2 product lines at Emulex:

Recently, Emulex acquired ServerEngine, with which they have worked for 2 years. They closed the deals with HP and IBM with ServerEngine and Emulex is winning quite a few deals in which their chips are equipping OEM 10 Gb Ethernet equipment and 9 out of 10 tier 1 OEMs have picked them for convergence (some exclusively, some not), amongst which HP, Dell, Cisco, Fujistu Siemens and IBM.

A big part of the company is already working on what will come next and will be delivered in 2012 and 2013.

The data centre of the future

A lot of enterprises are still at the crossroads with data, email and storage networks all considered 3 distinct networks. With this kind of architecture, customers are compelled to upgrade their data centres and cost is a big issue. A second step is to “move everything into virtual data centres and this is where we are today” Shaun added.

But in the last 24 months, we have seen the rise of converged fabric-based computing as announced by HP (Flexfabric), IBM (virtual fabric) and Cisco. Convergence is happening, for server virtualisation, switching, storage and adapters (LOMs i.e. LAN on Motherboard).  These past 24 months, convergence has been the flavour of the month and is showing the way forward.

from servers to blades and lastly … to “cookie sheets”

The 10Gb Ethernet is a new inflexion point which is a sign for innovation, and such innovation is made flesh with 4 main trends which Steve described here. These 4 trends are defining the future of data centres:

Behind these 4 trends, Steve described 3 business drivers which are impacting the way that data centres are being architected.

Data is growing at a staggering compound annual growth rate of approx. 50%. More users mean more transactions and convergence is therefore required. 9m servers will be shipped in 2010, 1m+ will be of the new breed, Shaun said and he added that we are moving from servers to blades and now what Shaun called cookie sheets because they are so thin.

From a networks point of view, what is driving change?

Steve described the 5 reasons for the change in the data centre from the network perspective:

The data centre of the future requires a new networking model
Emulex sees his role as that of a leader in that move into convergence, partnering with BNT, VMWare and all their OEMs.