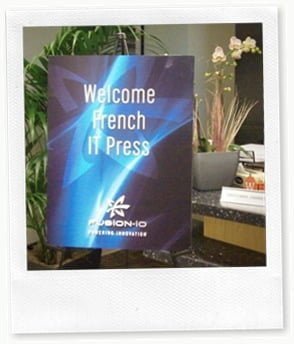 Fusion-io isn’t just about flash io-memory technology, it’s about scaling up. On November 16, we paid the scale-up a visit. Fusion-io is the epitome of these successful technology companies as can be found almost only in the US and which make this kind of press trips so useful.

A stunning customer base

The company was founded in 2006 by David Flynn and Rick White. In 2007, it unveiled its flash io-memory. In 2008, it launched its first products; but the market didn’t quite understand it.

In 2009, it then partnered with HP and IBM and Lightspeed and Samsung invested money in the company. In 2010, WSJ named Fusion-io the no.2 emerging technology company; it is 300 employee-big, based in Salt Lake City, Utah and most of its execs are based in Mountain View, Calif. Fusion-io is a disruptive company. In 2009, it grew by 5 1/2 times.

Customers include large names, mostly in the financial markets, such as Morgan Stanley, Credit Suisse but also Web players like Facebook or the West coast hit veteran website Craigslist, and Zappos, Sears, GM, Boeing and Chevron …

This is the main pain-point: customers may not recognise this, but they will notice that 1 in 3 servers use less than 20% of their CPU potential and this is a big threat to datacentre productivity.

The trend of SSDs was meant to turn flash and make it look like a disk, and the reason why we had this trend is that it was easy. Beyond that, Fusion-io has developed a new category, a hybrid of dRAM and storage which bridges the gap by providing the new form of storage called io-memory. But what does that mean to customers? Here are a few examples:

We are talking about improvements which are 10x or more and this is why this small company from Utah has grown into a 3 digit million $ company in just 3 years! and the end-client benefits are not just about performance, they are also about savings related to power and cooling.

So, why do OEMs like HP and IBM agree to work with Fusion-io even though io-memory is aimed at reducing the number of servers and disks which they sell? In fact, they agree to this because it’s an inevitable change in the industry, that if they don’t do it, someone else will and besides, the servers they sell tend to be a lot more upmarket too.

This underlying trend in the market is shown in the following diagram (source: Denali & Garner, February 2010) and shows that PCIe cards, the technology invented by Fusion-io should amount to more than 1/3 of the total SSD market by 2012-2013. The trend was set by Fusion-io and will soon become mainstream.

Lance Smith manages engineering at Fusion-io and gave us an overview of Fusion-io’s products (see picture of a 160GB io-memory card on the lefthand side).

The reliability of these cards according to Lance and Jim are second to none. As a result, there have been no data loss reported anywhere in the world thanks to the way that the cards are designed; each card includes a 25th chip which does checksums and ensures data integrity for each of the chips that make up the card (there is one on each side, tucked in the lefthand corner of the card (see photo above, the extra chip is highlighted in yellow on the top lefthand side of the card). 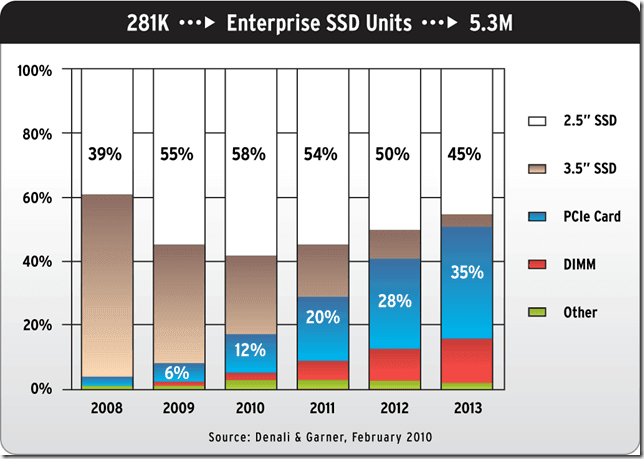 Innovation gives Fusion-io a leg up in the cloud game

“No one has come in that space”, Jim added, and no other competitor has launched a similar technology in the past four years and therefore, he adds, “Fusion-io has the first-mover advantage” in that market.

Jim and Lance are therefore very confident that they can still innovate in that space and keep the competitionMarket definition in B2B and B2C - The very notion of "market" is at the heart of any marketing approach. A market can be defined... behind.

A new feature is also announced, which will be made available at the end of Q1 2011: it’s about the so-called direct cache module which transforms IoMemory into the cache.

This will provide additional speed in a two-tier data centre environment (active tier on Silicon, archival tier on disk with de-duplication, no additional tier needed).