Cloud washing is just like greenwashing for cloud computing. On November 15, after Zscaler, we visited StorSimple, provider of Hybrid Cloud technology. Ursheet Parikh is one of the 2 co-founders and the CEO of StorSimple, a promising start-up operating in the storage domain, based in Santa Clara, Calif. 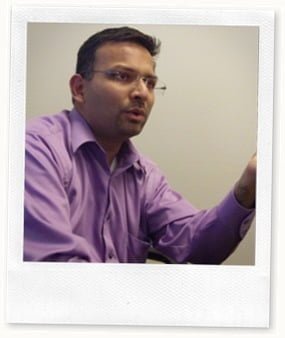 StorSimple started in May 2009, at the bottom of the depression, after exceptional reception from the VCs. Before this, Ursheet was working at Cisco and before Cisco.

StorSimple is pioneering In-bound marketing, as opposed to top-down marketing, because they want to be acknowledged by their peers above everything.

All engineers in the company have 20+ years of experience in the storage industry, and having 15-20 of such people is according to Storsimple’s CEO a recipe for success.

Their approach has been very conservative, starting with a beta with a few customers, and they are now planning to go live by the beginning of 2011. They have the financial backing to do this, and they make sure that all the customers comprehensively go through the beta test. There are no small vendors left in storage, and therefore, StorSimple is walking on eggs and thinks that they should build a business and not just a product, and they don’t want the start-up to finish when the initial product is delivered.

A crusade against “cloud washing”

For most CIOs, their budgets are a subset of revenue, and IT can only do what its budget can achieve, and this is why cloud computing is so appealing to IT managers. Enterprises need to embrace cloud computing to stay in sync with the competitionMarket definition in B2B and B2C - The very notion of "market" is at the heart of any marketing approach. A market can be defined.... So much so that Urshreet thinks that the leaders in that space in a few years won’t be the equipment manufacturers but service providers like Orange Business Services.

All of these strategies have issues (re. slide above), and StorSimple is adding an option to that list with what they call their Hybrid cloud strategy, which in Ursheet’s mind is addressing the full spectrum of the requirement, from core services and security to the end-user. Yet, StorSimple is not working against storage nor cloud service providers, Ursheet Parikh added, on the contrary;  it is aimed at providing a front-end interface to these vendors’ hardware and cloud solutions.

The problem: data explosion in the data life cycle 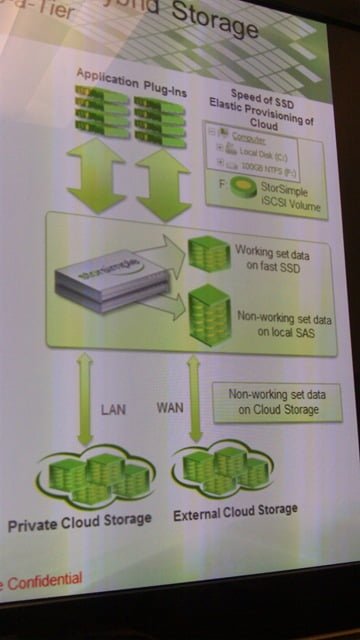 Collaboration has become a must if one wants to avoid the explosion of the amount of content and the number of copies of files that exist.

De-duplication is helping, but it doesn’t necessarily solve the issue Ursheet said: even with de-duplication, companies still back up vast amounts of data and move them around across servers.

What StorSimple is doing is to analyse the working set, to put that in local storage and use central storage for the rest. Now, the challenge with cloud computing usage is integration, performance and security.

The solution: hybrid storage by StorSimple

With hybrid storage in the Microsoft enterprise environment as seen by StorSimple can be summed up in a few points:

One of the most striking functions offered by StorSimple is that which goes by the name of “Cloud clones”. StorSimple Cloud clones are snapshots of current data changes and are stored in the cloud as if some mirroring, but not in real-time. This is making backups and disaster recovery (DR) far easier and less complex, according to Storsimple’s CEO.

Snapshots can be done every 4 hours (whatever frequency clients want), and data is saved centrally on the cloud now and then. This operation is transparent for users and is not wearing on the performance of each desktop. Clones can be launched overnight in case users or enterprises prefer to do so.

In terms of Cloud acceleration, there is a home-developed algorithm to optimise local storage vs central storage and include compression so as not to put the burden on the user.

Pricing is done only on hardware capacity (ingested content, so you don’t pay for the compressed footprint but for the uncompressed one), all the functionality is included. The result is an average 80-90% cost reduction for clients.

Ursheet concluded by saying that this solution is very well suited to Sharepoint, too, mainly when it comes to solving the huge storage issues related to Microsoft’s online file sharing service. Archival online is also possible, therefore putting an end to this “content communism” issue highlighted above, thanks to compression and remote data retrieval.