Back in June 2010, we visited Blade Network Technologies, a Nortel spin-off which was doing exceptionally well in the data centre business by providing networking infrastructure and services within the data centre.

Blade Network Technologies and IBM: plans for the future

A concept Vikram Mehta had described as being the “network fabric” of the data centre. We paid another visit to BNT on November 18 at their new premises in Santa Clara, but this time, BNT is no longer a start-up but an IBM company.

So what has changed since then and what is in store for the marketMarket definition in B2B and B2C - The very notion of "market" is at the heart of any marketing approach. A market can be defined... in that area? “Not much has changed in BNT Mehta said, apart from the red bar in the E of the Blade logo which has become blue” (as shown in our logo montage on top of this post) Mehta said, but the IBM deal was described in detail by the CEO of BNT as being a real opportunity for IBM clients.

It’s actually not quite true that things haven’t changed since June. BNT is now 322 people-strong, vs. 250 when we last met in June 2010, hiring more people in sales, engineering and customer support. BNT is also very close to the 10m shipped-ports bar which was their goal at the beginning of the year and they are now #2 in data centre switching.

On Oct 29, IBM closed the acquisition of BNT, a deal which had started on September 27, 2010. “As was discussed at our latest meeting in June” Mehta went on, “what our customers are worried about is the scaling of their data centre infrastructure”. The architecture of the future will be made of many IT elements, federated together: “but how do you connect such elements?” Vikram Mehta asked: “with the network fabric” he said, “and now IBM has that network fabric”.

“The maximisation of the IT infrastructure has very much been discussed via the world ‘virtualisation’” Vikram Mehta went on and IBM was a pioneer in virtualisation years ago. Now, Blade Network Technologies is bringing network virtualisation to the lot so that IBM is able to “deliver in all the areas of virtualisation: server, storage and network” Mehta said.

Besides, because networks are the weakest link in IT security, and because BNT has a track-record in network security, IBM is also able to better protect its clients’ data centres. There are many other areas in which BNT can team up with IBM beyond architecture improvements such as data warehousing (through the recent acquisition of Netezza by IBM), TCO reduction. 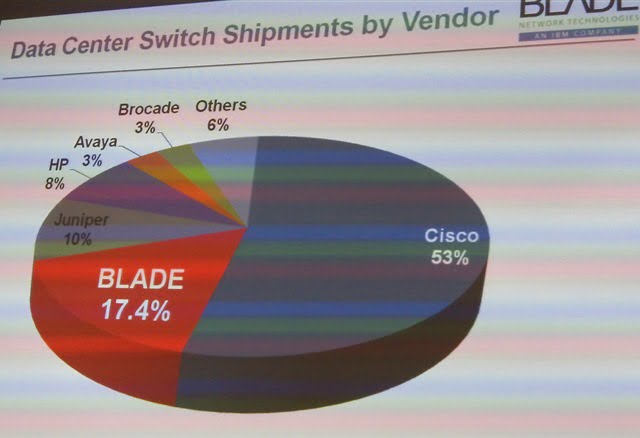 How is BNT linked to IBM and through which division? There are 2 things. IBM exited the networking business in 1999 and in 2010, almost 10 years later, they re-entered the market through the acquisition of BNT. BNT will report to the systems and technology group (STG) and will form the networking division within that group, Mehta explained.

Tivoli does IT service management at the highest level, Mehta added, and BNT has already been integrated into that picture for a long time and this integration will only get better under the new management.

The approach, compared to other visions on the market is far less proprietary, a vision in which customers choose what is best for them (NAS, fiber channel, Tivoli, Openview, Opsware etc.) we will continue to provide linkages to all these systems.
By focussing on the system, IBM is focussed on “best of breed” regardless of where elements come from, and “IBM is committed to best of breed” Mehta insisted. Hence, all the agreements that BNT had in the past, with Cisco, Brocade and Juniper will continue in the future. Some solutions are brought to the market by IBM themselves, some are the third party and delivered by IBM.

What does it change for BNT

It is easy to see what IBM is getting in that deal, but what are BNT’s own objectives? “Our focus is to grow our share of the pie” (see Gartner stats on the righthand side), Mehta responded, and BNT will achieve this through innovation and strategic partnerships, Mehta added.  He also mentioned that the slice of the pie would grow because the overall market itself would be growing too.

IBM will be working with co-opetitors HP and NEC

Mehta insisted that the business that BNT was doing with HP and NEC will not only continue but will be re-inforced.