Clustrix is a start-up which devised a new file data management system to support highly transactional Websites. Paul Mikesell, CEO and co-founder of Clustrix explained that his aim was to help “Web businesses spend less time working on their infrastructure, and spend all their time trying to make their site better instead.”

Data overflow has never been such a mind-boggling problem. New social media websites with hordes of users and multi-million connections as well as e-commerce behemoths with vast amounts of product, user and user preference data are causing database sizes to reach unprecedented levels. The result is overwhelming: scaling issues are staggering, incremental online expansion is towering, the impact on fault tolerance and availability are dire and we are not even mentioning TCO or ease of data management. 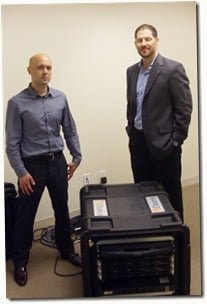 Let’s take an example with direct impact on users:  if someone were launching a query in Facebook across all of your friends’ friends you wouldn’t be able to do it because of the partitioning of all the databases.

These biggest pain points in the marketMarket definition in B2B and B2C - The very notion of "market" is at the heart of any marketing appr... were the starting point for the creation of Clustrix, a new venture co-founded by Sergei Tsarev and Paul Mikesell.

On June 4, at the end of our trip to Silicon Valley, we were greeted by Mikesell (left on our photo) and Daniel Liddle (right) at the Clustrix office, at the heart of San Francisco.

Clustrix has 3 ½ years of existence and has spent much time building the technology, it is funded by Sequoia ventures. The company was born from issues seen about scability issues at Mikesell’s previous start-up Isilon. The early 90s and the dot com boom put pressure on application servers and enhanced the need to increase storage hence the building of a massively performant database systems. This is the point from which the need to create Clustrix has arised. doing away with ‘sharding’ makes TCO 14 times lower Clustrix built a system which allows you to upgrade from 1 node (or server) to hundreds of nodes (or servers) in one single database, the system is delivered and sold like a hardware and software appliance.
So far, “sharding” has been the only way to solve data management scalability issues, but Clustrix now offers an alternative. “Sharding” is the application partitioning of data across isolated databases whereas Clustrix is offering a single instance scalable database. “Sharding is not just costly, it is also very risky” Mikesell points out. >>> read on at http://blogs.orange-business.com/live/2010/06/web-companies-shouldnt-have-to.html