Should one be investing in innovation in times of crises?

The answer to that last question is in previous studies carried out by PIMS (see PIMS history in the following transcript) – included in my lecture on innovation at the Paris university. What this PIMS study is showing is that even in times of crisis, innovation is not an option. On the contrary, it is during these periods that innovation is the real driver for success. 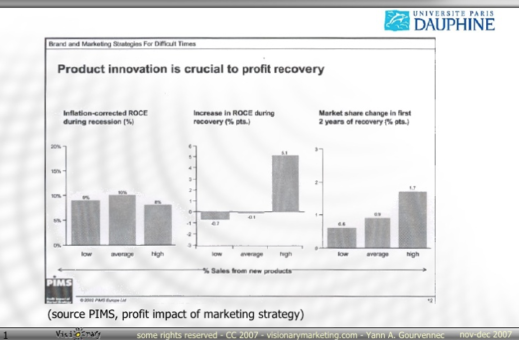 However, the return on investment is not immediate and therefore patience is required. Success for innovators who won’t give up during the current credit crunch will show – according to PIMS – in the years following the crisis through the acquisition of a few extra points in terms of marketMarket definition in B2B and B2C - The very notion of "market" is at the heart of any marketing approach. A market can be defined... dominance. Results will in no way happen in the short term though and this is why the real difficulty is to show managers that innovation budgets have to be maintained, let alone increased.

It is certain that the main inhibitor in that process is that managers are also driven by short-term issues in those difficult times, sometimes fighting for their own survival and therefore focussing not on innovation but on the bottom line. Hence Sir Stelios’ – the much revered Easy group innovation – response to an interview I saw on the Beeb a few weeks ago. When asked about the current credit crunch, Sir Stelios responded (quoted from memory) “I’m afraid that business is bound to be boring again; one will have to be a lot more cautious; at the same time” he added, “when the going was good, it was easy to confuse luck for skills, but from now on it will be a lot more difficult”. (note: similar feedback from Stelios in a Times article available online at this url).

TRANSCRIPT FROM THE NOTES OF MY SLIDE
Brief history of PIMS
The PIMS project was started by Sidney Schoeffler working at General Electric in the 1960s, then picked up by Harvard’s Management Science Institute in the early 1970s, and has been administered by the American Strategic Planning Institute since 1975.
It was initiated by senior managers at GE who wanted to know why some of their business units were more profitable than others. With the help of Sidney Schoeffler they set up a research project in which each of their strategic business units reported their performance on dozens of variables. This was then expanded to outside companies in the early 1970s.
The survey, between 1970 and 1983, involved 3,000 strategic business units (SBU), from 200 companies. Each SBU gave information on the market within which they operated, the products they had brought to market and the efficacy of the strategies they had implemented.
The PIMS project analysed the data they had gathered to identify the options, problems, resources and opportunities faced by each SBU. Based on the spread of each business across different industries, it was hoped that the data could be drawn upon to provide other business, in the same industry, with empirical evidence of which strategies lead to increased profitability. The database continues to be updated and drawn upon by academics and companies today.
What Pims have shown is that the impact of innovation is not immediate. mostly takes place 2 years after investment. This is why really successful companies never stop innovating (look at cisco) and don’t handle innovation as a 6-year cycle which only lasts for 2 years. It must be a continuous effort or it mustn’t be
ROCE: Return on Capital employed: ROCE is a measure of how productively a company manages its refining, marketing and transportation assets. ROCE is the ratio of operating profits generated to the amount of operating capital invested.
http://www.marathon.com/News_Center/Marathon_News/Glossary/
http://www.businessweek.com/smallbiz/tips/archives/2009/01/why_its_time_to.html