Newsatseven is a new service which compiles and delivers news to you, direct from the Web and automatically generates a youtube news show with an Avatar (named Alyx Vance). 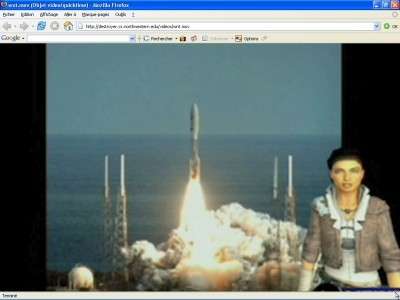 Below is the newscast from Newsatseven for June 19th, 2007 and it’s about the latest Harry Potter film. News archives are available here with more films to view. Newsatseven is entirely automatically generated and it claims that it is the future of the future; nothing less.

The project is led by Nate Nichols and Sara Owsley, two computer science graduate students at Northwestern University’s Intelligent Information Laboratory (InfoLab), under the supervision of Kristian Hammond, Professor of Computer Science and Director of the InfoLab.

The blog is not really updated and I noticed too that the videos aren’t generated on weekends. Maybe the future of the future is that machines will take a break on Saturdays and Sundays.

Now, the result – if it is really automatic – is indeed flabbergasting but the only problem with artificial intelligence is that it really looks and sounds artificial. There is still some work on our plates to make machines look and talk like humans, but should we bother?