Today’s selection …
Is this piece in Adweek about Gigya’s insights regarding Google+ and the fact that, although it is said to be the second biggest social network in terms of users, engagement on Google’s social platform is still low and even at its lowest. I have been very critical of Google’s efforts to mimic Facebook over the years and even though some of these efforts haven’t paid off I, as an amateur photographer, am beginning to witness changes in engagement in G+ as I am shoving more and more of my pictures into “communities”. And bingo! it works. It’s true that engagement is low in profile pages and posts, but communities, and mostly photographers’ communities like “landscape photography” or “street photographers” is now clinching it. It has taken its time but maybe Google+ has found its niche… Yet, those guys from Gigya are less than extactic: 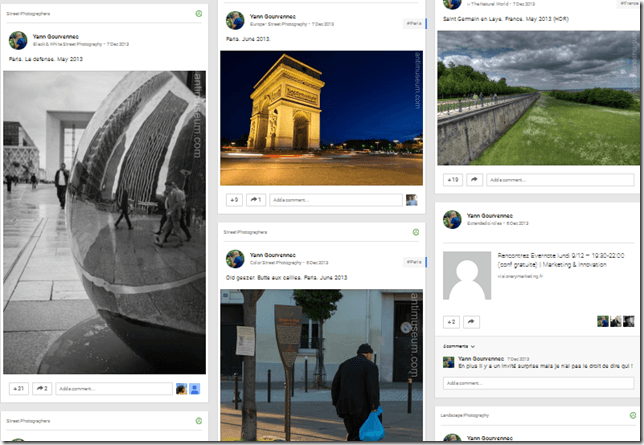 depending on what pictures I choose, I can get up to 30 or more +’s and a few shares on individual photos; not bad for an individual I’d say and better than most platforms (including Facebook)
Google Plus Shares Least Among Social Networks | Adweek

It’s the second most popular social network by some measures, but when it comes to sharing, Google+ has the least reach compared to its rivals, according to the latest data from the social media tech firm Gigya.
Facebook, Twitter, Pinterest and LinkedIn all incite more sharing on their networks than Google+, per Gigya, which claims to measure how 1.5 billion Web users share content each month.
In fact, Gigya manages the sharing functionality for more than 700 partners online. According to its data, just 3 percent of all social sharing went to Google+ from July to September.
By comparison, 41 percent of users shared content on Facebook; 20 percent shared on Twitter; 20 percent posted to Pinterest; and 4 percent to LinkedIn. Google+ counts more users than all of these platforms except Facebook because any user of Google services has a corresponding Plus account.

via Google Plus Shares Least Among Social Networks | Adweek.