On day 4 of our Blogger Bus Tour, we met with Carlos Diaz, the CEO and founder of Kwarter and Guillaume de Cugis, CEO and co-founder of Scoop’it, two French entrepreneurs who left their country in order to take their venture to the next level and … change the world! (this post was originally written for the Live Orange Blog)
Kwarter, how it all started 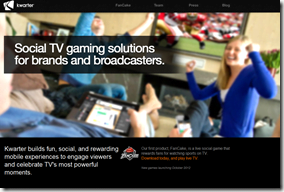 Kwarter started off with sports. The idea is to use your mobile in order to connect and comment, hangout. There is also a gamification (see my Vlab piece on that subject) angle of using such kinds of applications while watching TV and changing the user experience: the more you engage, the more you get points and also credits and eventually, you are able to redeem your credits to get t-shirts and other freebies.
The start-up decided to tackle sports as their first topic (Fan cake, the first social game to be edited and released by Kwarter is just about that) because “just watching TV isn’t enough anymore. The trend seen in Silicon Valley is to turn each passive experience into an interactive one”. The focus is on American sports only at the moment: American Football, Hockey and Baseball … but it should be a piece of cake (sorry, I couldn’t resist it) to extend it to European preferred games such as football and handball. 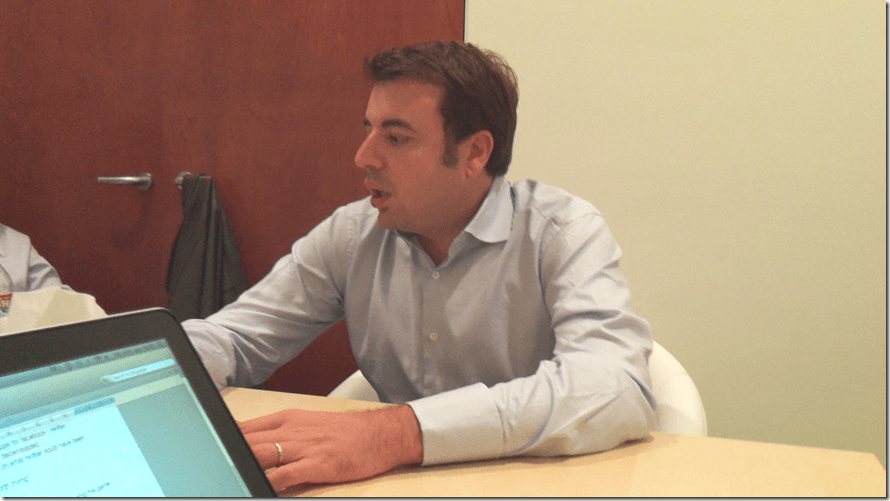 [Carlos Diaz, CEO and founder of Kwarter]
Diaz, the founder of Bluekiwi Software, whom I have known for years and I was very happy to see again in San Francisco, started the company in Summer 2011 and did a quick prototype which helped him raise  seed money very quickly. All this is very classic, although many start-uppers tend to forget about it; the name of the game is: prove the concept quickly, put together the technology, build the user engagement model, and find the business model … fast. Things have to go fast in the land of the Gold Rush.
a pivot around the initial business model
“The first idea was to have our own application and build traffic based on our brand. The ten next years will be about Gamification” Carlos Diaz added. In 2011 they Kwarter’s pilot was turned into a platform for other brands because they realised that they had to do this for others, not under their own brand. A few weeks later, they signed a deal with Turner and Bud Light; just that! Turner will kick-start its operation about the Baseball playoff. And we are not talking about small business but “half million dollar deals!”.
Diaz – like many others we saw in Silicon Valley – has managed to make his company pivot around its existing business model and hit the bull’s eye. Well done!
big corporations doing their shopping
“I was really amazed at the way on how large corporations were shopping for innovation in the Valley” Diaz went on. “What we do with Turner will be very disruptive: whatever you do will be displayed on the screen. For instance, as baseball players will be displayed on the screen, an overlay bubble will be shown with comments from Kwarter such as “20% of people believe this player will do a home run!” Baseball fans won’t have to wait for too long for the launch date will be October 5th, 2012.
Twitter (but not Facebook) is paying for TV channels to use its service
“So far we see the Twitter mentions on TV. But Twitter is paying broadcasters for this” Diaz said. “This is why Facebook isn’t seen on TV because Facebook refuses to pay for that kind of display”. 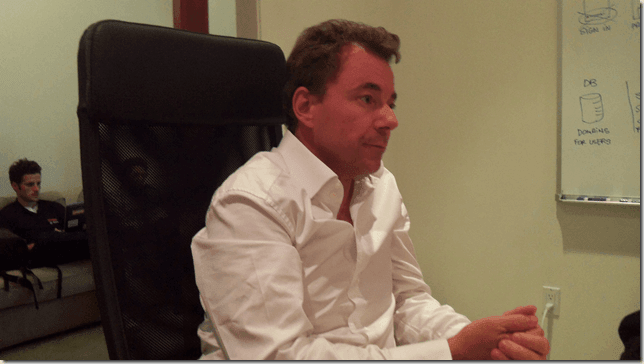 setting up one’s business in the Valley
Is it easy to set up a business here when one comes from Europe? “Sometimes I feel like Silicon Valley is like Disneyland” Diaz explained facetiously. “People are very naïve and they think that building a business is easy but it’s not. Just being turned down in Europe isn’t sufficient to launch a good company in the States” the French entrepreneur added.
“in 1999, Silicon Valley was a boring place!”
De Cugis said that “in 1999 and 2001 Silicon Valley was a very boring place. It all changed with Social Media, when some tech tsars became stars. It took me two years to adapt to the way of doing business here. After six months you realise that if you want to be part of this game, you can’t be part of it because you’re not part of the ecosystem and I started getting very frustrated. Then I realised all this was for real and I adapted to the way I needed to think of this as a real business. One year isn’t enough, it takes two years at least. And partnering is one thing but you need to have a good reason to come here.
living in the Valley is expensive, taxes much higher than France
“This is a difficult move” Diaz went on. “Personal life is very expensive here, even more if you have kids. A house with 2 kids costs $6,000 per month! Taxes are a lot higher than even in France. And this is because life is so expensive that people want to get very fast. This is why people want their projects to take off in such a hurry. People are very focussed on their jobs but they sort of work round the clock and have no vacations. Here there is nothing apart from tech, everyone is in high-tech. Even the salesman from the AT&T shop wants to start his own start-up”.
Scoop’it, from Toulouse to the Valley
Scoopit also went to NYC and hesitated between NYC and Silicon Valley. In NYC, the tech scene is competing with a lot of other things though. “If you go to the local Starbuck’s there, there are few chances that you will bump into a tech entrepreneur” De Cugis explained. “Here it’s a small city, there are only 700,000 inhabitants. You could go to a meet-up every night. And all that happens in Soma, you don’t even need to drive up to Silicon Valley.
setting up your business in Paris is a mistake
Although many would disagree, Diaz declared that “founding your start-up in Paris is a mistake, unless you are into Fashion or if you want to become a leader in your own country. All successful French start-ups (e.g. Meetic, Priceminister,…) aren’t known by anybody here. In order to do something to change the world, to be a game changer, one has to have a large market to start with” Diaz contended.
changing the world is hard
Yet, changing the world is hard… even in the Silicon Valley, and if believing in one’s dreams is important, one needs to avoid pulling the wool over one’s eyes. This, in a nutshell is what I withdrew from that passionate exposé by Carlos and Guillaume.