The Orange Blogger bus tour – of which I am the organiser on behalf of Orange of which I am the Director of Internet and social media – was stopping by San Francisco today and the whole day was hosted by Orange Silicon Valley
Georges Nahon delivered a very inspiring keynote today before our panel of bloggers in which he shared his vision with regard to what is happening in IT in general, and in the Valley in particular. I will begin my account of Georges’s visionary presentation by detailing his conclusions. As I always do, I have taken detailed notes of the pitch and they are made available at the end of this piece. If there is one thing that should be remembered from that pitch is that the Web is everywhere and in everything that will be happening in the future. Something which established players don’t like according to the Head of Orange Silicon Valley. However, Nahon insisted on the fact that it won’t be the same Internet we used to know.
Facebook will be “Yahooed!”
“Social” has been going through a rough patch over the Summer, with the now infamous Facebook IPO, dubbed “IPOcalypse”, IPO meaning “It’s Probably Overpriced” Nahon said facetiously. Yet, Europeans are wrong when they interpret these issues as the end of social media, Georges Nahon said in essence. Social is here to stay, and beyond, it will change everything which takes place on the Web, even though Facebook itself will probably be “Yahooed!” Georges added.
But the worrying thing I got from his pitch is that, according to his analysis, next to the World Wide Web that we all know, an increasing number of companies, including Amazon, are creating a “non-searchable adjacent Web” which sounds very much like the end of the Web as Chris Anderson announced in Wired a few years ago. I think Georges is right indeed, there is a growing concern that Net neutrality is being sacrificed for the sake of user experience. Time will tell, but there are indeed worrying signs. 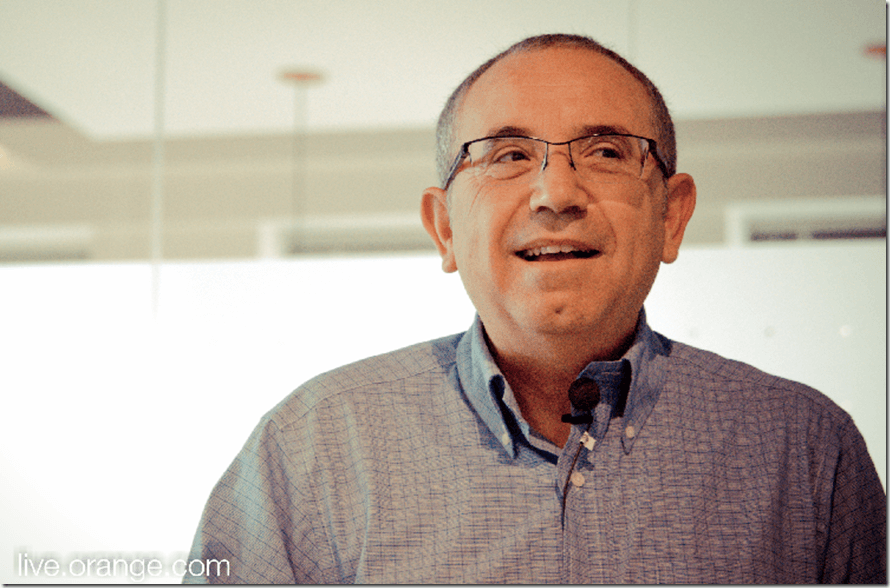 Georges Nahon, head of Orange Silicon Valley, on the first day of the blogger bus tour
Here is how I summed up Georges’s 5 trends for the future of IT:

Started as an R&D organisation and evolved towards what they are today (scouting organisation). 60 people, 40 of  which are in a position to file patents and they file 20 per annum. Often, it’s about reviewing the strategy. Statement from Prussian general “no plan survives contact with the enemy” e.g. 5 years ago, no one had seen the iPhone coming. Even analysts. An none of these people has seen Apple becoming a major player in the Telecom industry => be prepared for the unexpected. There were times in which you telcos could go to the ITU organisation and get things sorted but this isn’t the case anymore.
Essentially Orange wants to get prepared for the future. One of the key elements for Silicon Valley is capital investment. In Bay Area only, venture investments represent $3.2 bn 46% of total investments in the USA (San Jose chronicle on Q2 results). Texas only represents $ 179 m (3%) despite the huge tech firms in that state. The core subjects is ICT and media but not only.
The software industry in Q2 of this year received the highest level of funding. (34 out of 39% other source) $2.37 bn i.e. 32% of the total.
Market capitalisation: Apple + Cisco +Oracle +Google +Intel have a total of $ 1,261.82 bn (IBM is only $236b or FTE $37b). What this hides is the myriad of small companies which help these companies become what they are.

detailed analysis
This is the detailed analysis of the situation according to Georges Nahon. I am leaving my notes in raw format. They are useful if you want to understand where the above trends are coming from. Each bullet point sums up a weak or strong signal which add up in order to form trends:

“The establishment doesn’t know how to handle that” Nahon said. Giants – of which Facebook is a new member – are becoming acquisition monsters and therefore Silicon Valley is dominated by the power of money and those new acquisition giants. There is therefore a race for talent and “start-ups are getting snapped for their talent”. This new world is being called “Acqui-Hire” “this is one of the new buzzwords in the Valley” Georges said.