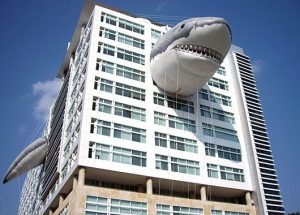 Discovery Channel were the 3rd presenters in track1 of Blogwell on November 9 in Philadelphia with Amber Harris and Gayle Weiswasser delivering the presentation. Shark week is one of the longest running television events (23 years!). How do you  bring innovation and bring it to another level for Discovery? was the question that our presenters had asked themselves.
This year was to celebrate the “’national holiday” nature of Shark Week and it was rebranded “happy shark Week”. The company started a campaign against shark finning and partnered with the Georgia Aquarium with a live-stream from the aquarium.
Social Media Strategy
Social Media is all about communities added Gayle. So Discovery Communications didn’t have to invent anything but work with the influencers, the very enthusiastic people “who were doing [their] marketing for [them]”. Discovery Communications then went on a ton of monitoring in order to identify and engage with the right influencers.  The week took place on August 6th, but they tried to make the event live throughout the year thanks to Social Media.
Tactics
Digital PR managed to impact major online portals, and used street marketing with a building in DC with a Shark in it: People would stop and take pictures of the building and report on it. The presenters discovered some very active enthusiasts who would wear their tee-shirt and post tweets about that on Twitter. The focus was on Twitter. People were encouraged to create some videos on Youtube and post them by themselves, showing themselves in their “Shark Week” tee-shirts. They were offered to upload them to the Discovery Channel’s Shark Week Video Challenge YouTube channel.
There was no official Facebook page, but Discovery Channel was able to claim that page and set and official Shark Week page on Facebook. Video drove a lot of traffic online. The ‘adopt a shark’ campaign also enabled people to make donations.
The results were impressive
No wonder with such an impactful theme, but one has to admit that the numbers are really great: 14,000 online media and blog posts and #sharkweek was a worldwde Twitter trending topic the 1st day of Shark Week and there was over 91,000 Shark Week mentions between Aug 1-6 which resulted in 100 million potential impressions (Tweetreach.com). Somewhat facetiously, Amber mentioned “that the Radian 6 curve showing the traffic had the shape of  a shark-fin!”
What worked according to the presenters was the complementarity of digital and real-life PR, the partnerships and the Twitter engagement. However, they had mixed results with the photo contest with only 28 photo entries, showing how hard it is to get people to cooperate. Facebook was a bit disappointing but the real issue is in what Amber added: “You don’t know what goes wrong, you could do everything right and still it wouldn’t work”.
One of the things that made it for that project is that the company culture at Discovery is very much geared towards innovation according to both presenters and that there is never any push-back on anything. “Everyone has been very supportive” they said, and Amber adds that, more broadly speaking, “everybody in the company should have a vested interest in Social Media” and all of them should help make things work.
What matters is that people collaborate
Gayle concluded with what I consider pearls of wisdom: “Social Media is nothing” she said, “what matters is that people collaborate and keeping things as open as possible”.